A crushing blow is an attack made by an mob or NPC that deals 150% of the damage caused by a normal successful attack. A Player cannot perform a crushing blow (unless under Mind Control, in which case they are treated as mobs).

Chance of a crushing blow occurring

When the attacking mob is more than 4 levels above the target, there is a chance of being struck by a crushing blow. If the level difference is only 3, which is common for players being attacked by "boss" mobs (who are always treated as 3 levels higher than their attackers), then the player cannot be hit by a crushing blow.

Important Note: As of

patch 3.0, the crushing blows mechanics have been changed. Now only mobs whose level is 4 or more above your level can deal Crushing Blows. However, this mechanic is based on a now-hidden quantity called the target's Defense Skill, which can be reduced by a few rare debuffs such as Unbalancing Strike. For every 5 points the target's Defense is reduced, it is considered 1 level lower for purposes of receiving Crushing Blows.[1]

The chance of being hit by a crushing blow is:

If your Defense skill is fully trained for your level, neither more Defense, nor Resilience, nor any other kind of bonus can reduce the nominal chance for you to receive a Crushing Blow. The only way to reduce your chance of receiving a Crushing Blow is for your combined chance to be missed, to dodge, to parry, and to block to be so high that the Crushing Blow chance is pushed off the bottom end of your attacker's Attack Table.

Use the following formula to determine your miss/dodge/parry/block rate:

Protection Warrior ability [Shield Block] increases block rate by 100%, removing crushing blows from the miss/dodge/parry/block/crit/crushing-blow table that occurs when an opponent attacks, and making the warrior more or less "immune" to both crushing blows and critical hits in a PvE environment. This is because an attack that is blocked (as with a shield) cannot be a crushing blow or a critical hit -- the three are mutually-exclusive attack results. A warrior may be susceptible to crushing blows if they are hit 3 times in 5 seconds, as the [Shield Block] ability has 2 charges. A mob with an attack speed of 2.0 or faster can therefore crush a warrior if he fails to dodge/parry/miss 3 attacks in a row. 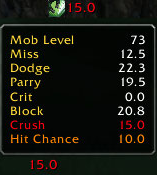