Crypt lords are undead nerubian spiderlords adept at summoning insect minions and crushing enemies. Betraying the nerubian people, the crypt lords have sacrificed the lifeblood of thousands to bolster the undead armies of Ner'zhul, winning an eternal life of servitude in his name.[1] (TFTMan 13)

These ancient, evil behemoths were once the mighty kings of the subterranean Spider Kingdom of Azjol-Nerub. Though the nerubians fell before the wrath of the Lich King during the fabled War of the Spider, the insidious crypt lords were swayed over to the Lich King's ranks and granted considerable power and the immortality of undeath. Now the giant, thundering beasts serve as the Lich King's mightiest warriors and the guardians of the Scourge's holdings in Northrend.[1]

Crypt lords are a different variety of the standard undead nerubian in that they resemble beetles more than spiders and are former nerubian spiderlords. This implies that they are a separate subspecies. This theory is supported by the many different subspecies of the qiraji, cousins of the nerubians. Nerubian viziers seem to be a different subspecies as well, although so far they do do not have another name for their undead nerubian form like the crypt lords.

In the "Road to Damnation", they were described as "a grotesque mixture of beetle and spider".

Other crypt lord names (taken from The Frozen Throne expansion):

A crypt lord attacks Baelgun in Lands of Mystery. 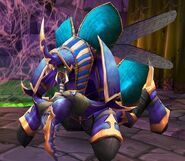 See this subject on the Hearthstone wiki: Crypt Lord