Cyanigosa is a powerful blue dragon located in the Violet Hold. She has been sent there by Malygos as the supreme commander of the invading forces to release the prisoners and enter Dalaran itself. She is the final boss encountered in this instance.

Arcane Grip: Pulls everyone in to her and wipes aggro. Tank should immediately taunt after this to regain aggro and reposition her back toward the stairs, it helps if dps stops for 1-2 secs while the tank regains aggro.

Uncontrollable Energy: Does instant damage to players in front of her and a debuff which inflicts 1000 Arcane damage every 3 seconds.

Tail Sweep Does damage on enemies behind her, interrupting spell casting for 2 sec.

Fairly easy tank and spank. Tank should aggro her and tank her facing away from the group to get away from the breath. Periodically she does Uncontrollable energy, which can be dispelled. Also she will randomly summon everyone to the middle and throw them back. The teleport is an aggro wipe. Character Pets do not get their aggro wiped, however, so make sure the main tank taunts Cyanigosa right after the teleportation. 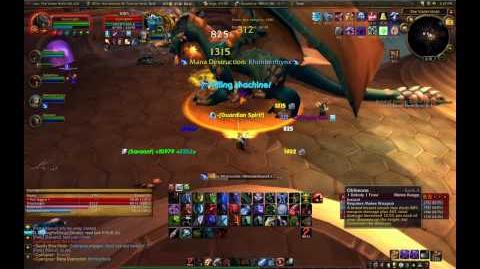 Cyanigosa in her elf form.