The land surrounding the bay is called the Howling Fjord. It is a frozen wasteland of ice, making travel treacherous. The only known inhabitants in the bay are the residents of Valgarde. However, the water is far too cold to support most forms of aquatic life.

Valgarde is on the western shore and the harpooning Nifflevar is on the cliffs on the eastern side of the bay. The bay is fed by Lake Cauldros via waterfall, and upon that lake rests Utgarde Keep.

Early on in the Third War, during the Human campaign of Warcraft III, Arthas was enraged at the Scourge's actions in Lordaeron. Knowing it was Mal'ganis' foul play, Arthas pursued him, and was able to successfully make landfall on Northrend at Daggercap Bay.

A live version of the same cave

Wyrmskull Village on the northwestern shore

The vrykul are very welcoming 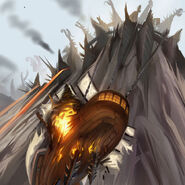 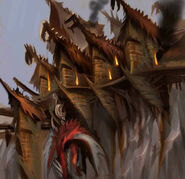 Nifflevar on the eastern shore
Español
Community content is available under CC-BY-SA unless otherwise noted.
Advertisement