Were you looking for the version of

Dalaran that has moved to the Broken Isles or

Dalaran in its temporary location above Karazhan, Deadwind Pass?
This article is about the in-game city over Crystalsong Forest. For lore and history of Dalaran, see Dalaran (lore). For the area in the Alterac Mountains, see Dalaran Crater.

Crystalsong Forest
Deadwind Pass
Broken Isles
Dalaran (aka Dalaran City and Dalaran Regal) is a magocratic city-state which was once located by the Lordamere Lake on the Alterac Mountains shore in the Eastern Kingdoms. With the beginning of the War against the Lich King its leaders, the Kirin Tor, have used their powers to move the city over the Crystalsong Forest in Northrend in order to use it as a front to attack the armies of the Lich King.

The Kirin Tor rule the single city.[1] (ToD 73) Its inner fortress, the Violet Citadel, has served as the focal point for magi and the study of the arcane throughout human history. The kingdom's national color is violet and its flag is a yellow, possibly golden, eye set against a light purple background.

Dalarn was one of several kingdoms that emerged as the Empire of Arathor declined (see Seven Kingdoms and The Seven Kingdoms). Long ago, most human magicians lived in Strom. Wanting a place more suited to extensive use and study of magic, they traveled north to the Alterac Mountains and founded Dalaran with the High Elves. More wizards followed, and the city became a haven for magi and a center of arcane study. The mages of Dalaran protected inhabitants who weren't magic-users with powerful protection spells, and created a decadent, extravagant paradise. Dalaran was also built atop a massive ley line.[2]

This overuse of magic with no proper protection or regulation, though, acted as a beacon for the Burning Legion, luring them back to Azeroth. Demons slipped through the gaps in reality, terrorizing the locals until the ruling Magocrats were forced to turn to the elves for aid. High Elf wizards quickly realized what had happened and warned that humanity would have to give up magic to subdue the threat completely. The Magocrats, unwilling to sacrifice their power, instead proposed selecting a mortal champion to protect them from the Legion.

This Guardian would have access to all their might, and would form a secret defense for the world. The elves agreed and, through the newly formed Order of Tirisfal, provided guidance in the selection. At the same time, the Magocrats sent some of their number to research and catalog all human magic. These wizards became the Kirin Tor.

The Kirin Tor became the city’s ruling power. Dalaran, though not a large city, was a beautiful place of towering spires and glittering streets, and the people there were happy and well protected. The Kirin Tor’s headquarters was the Violet Citadel, an impressive building so named for its stone walls which gave off a faint violet light. The building had many libraries, research chambers, testing rooms, classrooms, meeting alcoves, and bedrooms.

During the Second War, Dalaran entered the Alliance of Lordaeron in order to help fight the invading Horde. After the war, Teron Gorefiend and his Death Knights, aided by Deathwing, were able to successfully enter Dalaran's Arcane vault and steal the Eye of Dalaran from it.

Later, Dalaran found itself powerless to stop Prince Arthas and his forces when he led the Scourge through Lordaeron. Arthas acquired the spellbook of Medivh and Kel'Thuzad used it to summon Archimonde, who destroyed Dalaran. The city was left in ruins.

The Kirin Tor refused to abandon their home, however. They returned to the ruins months later, destroying those few undead creatures that remained, and reclaimed their city. They erected a glowing dome around the entire city, powerful enough to destroy anyone who touches it, while they worked to rebuild their fallen city. [3] (APG 154-155)

Eventually, the city, including the Violet Citadel, was somehow moved to its current location floating above the Crystalsong Forest in Northrend — close to the border with Icecrown. It left only a crater in its original place.

One thing to take into consideration is that three of Dalaran's best wizards, Khadgar, Jaina, and Rhonin have had dealings with the Horde in the past. Also, Antonidas studied the effects of the orcs' lethargy extensively enough to know that they could be reasonable in the absence of their demonic bloodlust.[5] (W3Man 82) This could possibly explain why Dalaran could have dealings with the Horde, especially against a common enemy. Another factor to consider is that many Forsaken and blood elves were formerly citizens and even rulers of Dalaran.

The city contains areas that are faction-specific in the same manner as Shattrath City is divided amongst the Aldor and Scryers. Certain parts of the city can only be reached by Alliance players (Silver Enclave) while others are strictly for Horde use (Sunreaver's Sanctuary). The majority of the city remains neutral.

Evidently, the blue dragonflight, led by Malygos, has declared war on all mortal magic-users.[6] In response to this crisis, the city has been moved (likely with the bulk of the Kirin Tor and most available resources) to levitate high in the skies above Northrend. Today, Dalaran floats majestically above the Crystalsong Forest in defiance of the blue dragonflight as well as the forces of the Lich King in Icecrown, which are located to the north of its current position.

Dalaran can be accessed via the teleport crystal in Violet Stand, Crystalsong Forest, north of the Dragonblight. A council — including Archmage Modera, Vereesa Windrunner, and Archmage Aethas Sunreaver, with Rhonin at its head — leads the new Dalaran in its war effort in Northrend.

It acts as the neutral sanctuary city for the continent, similar to Shattrath City in Outland, and can be accessed by teleportation from the Violet Stand in the Crystalsong Forest or by flying mount. Like Stormwind's Stockade and Orgrimmar's Ragefire Chasm, Dalaran has its own instance within the city: the Violet Hold. Like Shattrath City, there are no class trainers (with the notable exception of mage trainers, given the city's history) nor an Auction House for most players; Patch 3.2 introduced an Auction House for Grand Master Engineers with the addition of Steam Powered Auctioneers (

Reginald Arcfire <Steam-Powered Auctioneer>) to the Like Clockwork engineering shop.

These auctioneers were later made available for all players in the

Cataclysm expansion which also added class trainers in the faction specific areas. Grand Master trainers for each profession are available in the city. Portals are located within the Alliance and Horde districts of the city, connecting to the factions' capital cities and Shattrath City. There is a portal trainer at the Violet Gate, and there are battlemasters and an arena master in the Underbelly sewer system.

According to blue poster Bornakk, Dalaran will remain in Northrend for the foreseeable future.[7]

The portals to the Alliance and Horde capitals will be removed in Patch 4.0.3 and replaced by class trainers.[8] Auctioneers have also been added to the city.

In Tides of War

The Kirin Tor is beginning to affiliate more with the Alliance, after the expulsion of the Sunreavers. In Patch 5.2, Kirin Tor Offensive is introduced as an

Alliance affiliated faction in opposition to the

Following the terrible Battle on the Broken Shore, Dalaran moved briefly and could be found hovering over Deadwind Pass, which is where Karazhan still remains.[9] In the effort to aid adventurers in their quest to defeat the Burning Legion by recovering the Pillars of Creation, Dalaran was moved again to float above the Broken Isles between Suramar City and the Broken Shore.[10]

Dalaran is split into several inter-faction zones, and 2 faction only zones. These are:

There are 3 major factions in Dalaran. These are:

Previously, during The Third War, the city was also inhabited by the Sorcerers' League and Mages' Guild, two Alliance-aligned wizard-factions that fought alongside Kirin Tor against the Scourge. As they haven't been mentioned since then, they were possibly either destroyed or fused with Kirin Tor.

Just prior to the release of

World of Warcraft: Cataclysm, all portals below except for the ones to Wintergrasp and in The Violet Citadel have been removed and replaced by class trainers.

Since Wrath of the Lich King went live, Dalaran has supplanted Shattrath City as the major hub for player activity, due to easy access to the capital cities in the southern continents, to Outland via Shattrath, and to the high level content in Northrend.

Since Patch 4.1 portals to Stormwind City and Ogrimmar are active again. They can be found at their former spots, in the Silver Enclave and Sunreaver's Sanctuary, respectively.

A large, gaping crater has replaced the old location of Dalaran, with a weakened shield in place of the opaque dome, though there is some purplish smoke around the site — possibly residue from magic dome or the city's (literally) earth-shaking exit.

A full view of Dalaran from the air in Icecrown.

A tunnel opening underneath to the Underbelly, in case you didn't think it's floating.

Dalaran while still in the Alterac Mountains

A fan painting of Dalaran

The Violet Hold (In front) and the Violet Citadel (In background)

Below can be found some of the changes and additions to Dalaran since its move. 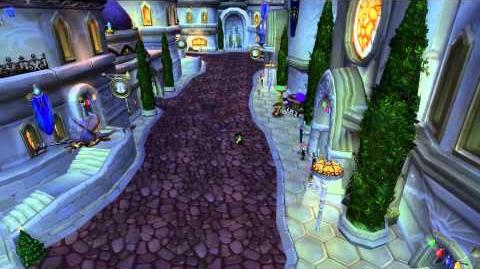