Danath Trollbane, who may have once had the name Danath Dungalion, is a level 65 quest giver located at Honor Hold in the contested territory of Hellfire Peninsula. He is the master of the Hold, and commander of all Alliance forces in Hellfire. He sends Alliance adventurers on quests across the peninsula and into Hellfire Citadel to do battle with the fel orcs under Warchief Kargath Bladefist.

Danath is the nephew of Thoras Trollbane, Lord of Stromgarde, and militia commander of the Alliance Expedition to Draenor. He is also known as "Danath Dungalion".[1] (S&L 29)

A mercenary captain from the Stromgarde militia at the beginning of the Second War, Danath was made famous for leading the armies of Stromgarde in the final fight for Khaz Modan. His status as a great general and fighter elevated him to the position of Overseer at the orcish internment camp system in Azeroth, based at New Stormwind.

Danath was called to reinforce Nethergarde Keep when the Horde reopened the Dark Portal. Taking half of the standing forces in Stormwind, Danath headed out to Nethergarde where he was ambushed by the Death knights and the new Warsong Clan. Knowing that the Horde was going to win the battle, the men sacrificed themselves so Danath could warn Khadgar, the wizard in charge of Nethergarde. Against his wish to stay with his men, Danath could not let their sacrifice be in vain and galloped to Nethergarde where they were under siege by the Warsong led by Grom Hellscream until they were relieved by his friend and commander General Turalyon. Danath would never forget the guilt for leading then leaving his "boys" as he called them to be slaughtered.

When Ner’zhul took the Book of Medivh, among other items, to Draenor, Danath joined the Alliance Expedition as second in command and the tactical advisor to General Turalyon. After taking Hellfire Citadel, Danath led half of the Expedition along with the Kurdran Wildhammer's Gryphon Riders and half of Alleria's rangers led by Thalressar who became his advisor after Ner'zhul while the rest went after the items. During the chase, Kurdran was struck down by Ner'zhul. Enraged with the loss of his friend, Danath relentlessly pursued the Horde and was determined to launch a full attack at once on Auchindoun where the Horde had taken refuge but at the urging by Thalressar he quickly calmed down.

As they waited, Thalressar and Danath encountered the arakkoa Grizzik. Learning that Kurdran was still alive, Danath quickly followed Grizzik as he led them into the tunnels of the Auchindoun. There Danath met the draenei priest Nemuraan. Convincing the draenei that they were going to rid the ancient temple of the orcs, Nemuraan aided them by calling the ancient draenei spirits and leading them into the tunnels and with the aid of his newfound allies, Danath led the Alliance against the orcs there where the humans, elves and dwarves would fight for the first time along side the draenei who would one day be members of the Alliance.

After rescuing Kurdran, Danath comes face to face with the renowned orc chieftain Kilrogg Deadeye who barred the way to Ner'zhul. After fighting a fierce but honourable duel, Danath slays the great orc warrior but not before Ner'zhul was gone.

Parting his new friends, Danath rejoined Turalyon and lay siege to the Black Temple where Ner'zhul was opening new portals. When the planet was starting to tear itself apart, Danath and his friends defended Khadgar against overwhelming forces while the mage close the Portal. Then with the rest of the expedition, he disappeared into one of rifts Ner’zhul created to escape the dying Draenor.

Danath Trollbane has since been immortalized in stone, along with the other leaders from the expeditionary force, in the Valley of Heroes in Stormwind.

Danath and his men survived the cataclysm that created Outland and now reside at Honor Hold, which has stood since before the sealing of the Portal. Honor Hold was left to its own devices in the battle against the Burning Legion and the fel orcs of Magtheridon, until Lord Kazzak reopened the Portal decades later. Danath, along with the rest of the Alliance forces, was presumed to be dead by those that remained on Azeroth. It turned out that many of them were still alive, including Danath. Now, Danath has welcomed the much-needed supplies and reinforcements from Stormwind and Nethergarde.

Through these reinforcements, Danath has learned of the fate of his beloved Stromgarde, destroyed during the events of the Third War. Once his duty in Outland is done, Danath wishes to return to Stromgarde and restore it to its former glory.

Danath is the last of the five leaders of the expedition to remain at Honor Hold. Khadgar settled in Shattrath after his journeys to other worlds. Kurdran and most of his Wildhammer brethren have set up base in Shadowmoon Valley. Danath has not heard from Turalyon or Alleria in over a decade.

When asked about his homeland, Danath replies: "Romus informed me of the tragedies that beset my beautiful city. There are no fitting words for the sorrow I felt upon hearing of Lordaeron's fate - and the fate of my own, beloved Stromgarde. Twenty years ago, no one had heard of the Burning Legion... Damn those cursed devils! Rest assured, <name>; should I ever return to Azeroth, Stromgarde will once more rise as a force of reckoning. This I swear..."

Danath's possible return to Stromgarde is hinted at when players speak to Skuerto in Cataclysm: "I'm sick of sittin' in this hole. I hope whatever sorry pencil-pusher is holdin' up Danath's return gets a punch in the jimmies."

Militia Commander of Stromgarde. Tactical Advisor to General Turalyon, Force Commander of the Alliance Expedition that marched into the orc homeworld of Draenor. Presumed deceased.

We honor your memory, nephew, and your sacrifice. Since the founding of our glorious empire, the path to valor has always been drenched with the blood of heroes. 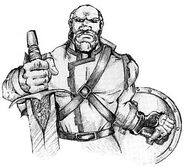 In the Second War

Danath at A Hero's Welcome in Dalaran (