Highlord of the Ebon Blade

Knights of the Silver Hand (formerly),

Knights of the Ebon Blade,

Highlord of the Ebon Blade, Master of Acherus

For his presence in Icecrown, see The Ebon Watcher.

Darion Mograine is the Highlord of the Knights of the Ebon Blade, an order of death knights which turned renegade after being sent by the Lich King to the region east of Tyr's Hand. He is the son of Alexandros Mograine and a former knight of the Argent Dawn. He came into possession of Corrupted Ashbringer after killing his father in Naxxramas as part of a failed rescue plan carried out by some members of the Argent Dawn and used it to kill himself and free his father's soul.[1] He became a death knight of the Scourge.

He has a pronounced role in the death knight starting area.

On the day of Darion's birth, he was stillborn. Alexandros, in a hurry, rushed the baby to a nearby stream, and from the freezing water, Darion Mograine entered the world. However, the joy his father felt quickly turned to grief as his wife and mother of his children, Elena, died due to complications from the birth.

In a battle within the plagued city of Stratholme, in which young Darion insisted on fighting, he took a serious wound and fell unconscious for a day. Upon awakening, the boy described his experience as being surrounded by darkness, before being shown a light that he followed back to life. [2]

Following the death of his father, Darion began to question the Light before being confronted by the troll priest, Zabra Hexx. After being counseled by the troll to search out his father in a fortress floating above a burning city, Darion joined the newly formed Order of the Argent Dawn.

With a handful of Argent Dawn volunteers and a mysterious mage known as Castillian, Darion infiltrated the fortress of Naxxramas. After besting the lords of the Necropolis and losing his entire party to the Four Horsemen, the Corrupted Ashbringer came into Darion's possession. The sword's voice led him to the Scarlet Monastery where, unaware of the actual treachery of his brother, Renault Mograine, Darion was attacked by Renault who considered him to be the last link from his past, coming to torture him. The spirit of Alexandros Mograine appeared from the Ashbringer, beheading his traitor son and forgiving him afterward.

Realizing that his father's soul was trapped within the Ashbringer, Darion stole a steed from the Scarlet Crusade and ran away. Fairbanks then visited him in a dream, telling him to go and find Tirion Fordring. Darion followed the ghost's orders and eventually found Tirion, telling him what happened to his father, though only after arguing with the pariah. Afterward, Tirion told him of how he was banished. He told Darion that nothing could be done for Alexandros. When mounting his stead, Tirion told him that only an act of love greater than the act of evil could free his father's soul. Darion then invited him to join the Argent Dawn and despite Tirion's outright refusal, left the option open by asking him to "Be a Hero".

After his meeting with Tirion, Darion ventured to Light's Hope Chapel where he came across a Scourge army waiting to attack. Maxwell Tyrosus, overjoyed at his return, told him about the one thousand souls of the champions that died defending Capital City from Arthas and the Scourge and were later carried beneath the chapel. Darion took his place in the lines of The Order of the Argent Dawn in defense of the fallen. During the night he experienced a terrible vision about a world without the Light, a world where the Scourge were triumphant. In the morning, a call to arms was made to the soldiers as the First Battle for Lights Hope began. As the tide began to turn against the Argent Dawn, Tirion arrived riding Mirador and managed to save a woman from an abomination as he joined the fray. As it seemed as though the Light-blessed soldiers of the Argent Dawn might prevail, Kel'Thuzad himself joined the battle. Understanding that the Lich King's right hand had appeared, Darion charged forward, wielding the Corrupted Ashbringer as his father had long ago, and fought his way to Kel'Thuzad himself. The lich showed no fear and said that even the Ashbringer was not powerful enough to stop him. At that very same moment Darion realized what Tirion's words meant. Darion, as an act of love not only for his father but also for the cause they believed in, plunged Ashbringer through his heart with the words "I love you, Dad." In response to his noble action, the souls of a thousand vengeful knights erupted in pillars of light that purged the hills around the chapel of all traces of the Scourge. All that remained were the figures of Kel'Thuzad and the undead figure of Darion Mograine, the Corrupted Ashbringer still pierced through his chest.

As Kel'Thuzad stood triumphant, he commented on how he was willing to sacrifice his own forces if it meant claiming the last Mograine's soul. In an eerily similar fashion, he asked Darion, "Who do you love?" Now lifeless in the service of the same force he swore to eliminate, the newly risen death knight answered back, "no one."

Some time later Darion was made Highlord of the Death knights of Acherus, an order of Death Knights with the sole purpose of annihilating the remaining living in the Eastern Plaguelands. He also planned and formulated not only the forces in the Eastern Kingdoms, but also the strategy of the forces of Northrend and the would-be assault on Kalimdor. He gave orders to all newly-created Death Knights under his authority to aid in the scourging of the Eastern Plaguelands. This was to be done in the name of the Lich King, and originate from Acherus, the Ebon Hold.

After the crushing of the Scarlet Crusade, the Death Knights of Acherus began preparation for their final assault on Light's Hope Chapel. Highlord Mograine assembled his most worthy and strongest Death Knights to begin the Second Battle for Lights Hope. There he learned that the Ashbringer would refuse to strike down any foe, and refused to obey his commands. One of his three generals then fled, as he was forced to face the tremendous power of Lights Hope Chapel's consecrated ground. As Tirion arrived, Highlord Mograine admitted defeat to the superior forces of the combined Silver Hand and Argent Dawn. At that moment, his master, the former Prince of Lorderon, the Lich King, Arthas appeared. After a confession of guilt from the Lich King, who had admitted he sent the Death Knights to its doom just to bring Tirion Fordring out of hiding, Highlord Mograine attempted to attack his master, only to be sent flying. As the Lich King was about to end the Death Knight's life, Darion threw the Corrupted Ashbringer to Tirion who in turn was able to purify it and push the Lich King back with the combined forces of the redeemed blade and the sacred ground.

In response to the Lich King's betrayal, Darion now leads the newly freed Death Knights, now known as the Knights of the Ebon Blade, in a campaign to wipe out the forces loyal to the Lich King from Ebon Hold and establish it as a neutral haven for all Death Knights to call home.

He can be found initially at the Argent Vanguard in Icecrown discussing tactics with Tirion Fordring; after completing

[80] The Last Line Of Defense, he moves to an area in the Valley of Echoes near the Light's Breach. During these events he is known as The Ebon Watcher.

Darion appears as himself during

[78] The Air Stands Still, summoned by the player to fight Underking Talonox in Scourgeholme, and again in the Cathedral of Darkness in

[80G5] The Fate of Bloodbane Darion leads a group of Knights of the Ebon Blade in fighting Orbaz Bloodbane and his Host of Suffering.

Tirion Fordring and Darion Mograine next appear together in Icecrown Citadel at Light's Hammer where they lead the Ashen Verdict, a union of the Argent Crusade and the Knights of the Ebon Blade.

He is also involved in the creation of [Shadowmourne].

Should a raid member with the Unsealed Chest bring Alexandros' Soul Shard to Darion, he will reunite with his father, the Ashbringer Alexandros Mograine. Alexandros explains that during his time of captivity in Frostmourne, the one memory that allowed him to keep his sanity was Darion's sacrifice. Darion proclaims that for his father, he would give his life "a thousand times."

With the addition of the Warlords of Draenor expansion, Darion can sometimes be found in the Garrison's Inn with a daily quest, thus he has at least made the journey.

Mograine can be found within the death knight Order hall, the version of Acherus floating above the Broken Isles. Players turn in their Artifact Weapon quest to him, and he subsequently promotes them to the rank of Deathlord, instructing his fellow Knights to follow the new Deathlord's orders as they would his own.

In their Order Hall Campaign, the Ebon Blade seeks to bring back the Four Horsemen, in order to face the Legion. After raising from the dead Thoras Trollbane, General Nazgrim and Whitemane, the three horsemen, Darion and the Deathlord make their way to Light's Hope as they did once, but this time not to destroy the Light, but to save the world from destruction. Their attempt to raise the Fourth Horseman failed, with the death of Darion as a result. However, the Lich King reveals his will, and commands the Deathlord to raise Darion as the Fourth.

He is involved in the following quests in and around the Ebon Hold:

He also gives most of the [Shadowmourne] quests:

Member of the Scourge

Member of the Knights of the Ebon Blade

At Battle for Light's Hope Chapel

On describing the Ashen Verdict

Ready yourself, <name>.
The time has come for the Lich King's reign to come to an end.

What is the Ashen Verdict?

The Ashen Verdict is a select group of the most talented craftsmen in the Ebon Blade and Argent Crusade. Its creation symbolizes the unity of our forces as we mount this final assault on the Lich King and his minions.
It is through the Ashen Verdict's efforts that we have discovered how to bend saronite to our will.

How can I learn to work Saronite?

Speak with Finklestein, <class>. He can set you on the path.
Demonstrate your loyalty and their methods shall be made known to you. 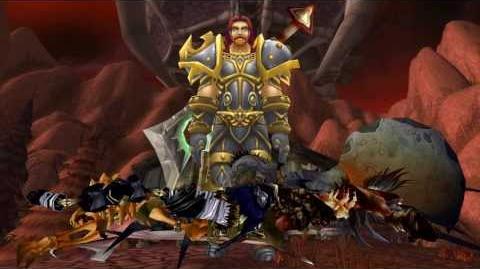 See this subject on the Hearthstone wiki: Darion Mograine