Dark Factions is a source book for the World of Warcraft RPG. The book was released on May 14, 2008.

Crush the Alliance AND Horde!

Naga and satyrs stir in dark places. Goblins invent crazy devices. The Atal'ai summon a bloodthirsty god. Azeroth is home to more than just the Alliance and Horde.

Dark Factions is a supplement for the World of Warcraft Roleplaying game.

Dark Factions is unofficially subtitled the "Independent Player's Guide", because it's like the Alliance and Horde Player's Guides, but for independent factions and races...One of the races we cover is the pandaren. You'll see the pandaren written up as a new race, as well as at least one racial iconic class for them: the Wardancer. There's also a couple prestige classes designed with pandaren in mind. A Pandaren prestige class is the Brewmaster, based on the hero unit in Warcraft 3. The other one is called the Pandaren Transcendent. Here's a quote:

"These are the pandaren's ultimate heroes: Spiritual avatars capable of summoning vast storms of lighting, smashing mountains with their terrible fists, and breathing winds into existence."

By the way, I should mention that Dark Factions isn't quite set in stone; everything I mention about it could, theoretically, change.-Luke Johnson, 2006-11-08

Listed below are articles confirmed to be in the book. (Note that some of the page numbers might be slightly off.)[1]

This is a list of things that differ from the index list. What exists below are material that may have been removed or moved to a future sourcebook.

Hinted at for future supplements;

This section represents info mentioned and given game but not seen in the book. Perhaps these were cut from the initial document [2], or planned to be included in a future book.

A history of delays

According to comments by Luke Johnson the book was finished long before the release of Naxxrammas patch, and the release of the The Burning Crusade, but then delayed for a long period.[3]. Below is a history of those delays;

The Argent Dawn fight the Undead.

A member of the Scarlet Crusade kicks some butt.

The Argent Dawn and the Scarlet Crusade.

A member of the Defias Brotherhood assaults a peasant. 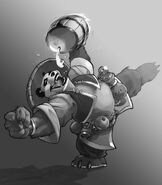 The Argent Dawn fight the Undead.