WoWWiki
Register
Don't have an account?
Sign In
Advertisement
in: Articles which are likely to change in Battle for Azeroth, Sections removed from game, Darkshore,
and 4 more
English

Edit this page
watch 02:45
'World of Warcraft': Terror of Darkshore
Do you like this video?
Play Sound

Elemental
Other 180 (prior cataclysm stats)

Darkshore is a vast strip of a jagged coastline on the northwestern part of Kalimdor. It is known for its characteristically gloomy woods and rocky beaches, littered with ancient ruins and mountainside caves. The night elves of Teldrassil claim this shoreline as part of their ancient realm and despite recent disasters such as the destruction of the ruined port town of Auberdine and the newly arrived Twilight's Hammer clan and Shatterspear trolls during the cataclysm, their influence on the zone is still dominating.

This rocky area stretches along Kalimdor's north coast. Rain, winds, and rocky beaches make the place inhospitable. Old night elf ruins stand crumbling on the cliffs, with elements, murlocs and naga lurking within. Sentinels used to patrol the road from the now ruined port town of Auberdine towards Ashenvale to the south, as the night elf port town of Auberdine served as a friendly trading and traveling hub prior the events taking place in the Cataclysm.[1]

The region is not without dangers, however. Aggressive wildlife, such as bears, saber cats, stags, and other animals roams the grassy hills and stalks among the dark trees. The ruined cities of the night elves that dot the landscape are infested with elementals, naga, and haunting ghosts while cultists of the Twilight's Hammer ambush unwary travelers near their camps beyond the roads. Even the seas are unsafe, as bloodthirsty frenzies, gigantic threshadons, and hostile murlocs lurk beneath the waves.

Darkshore was once one of the most prosperous regions of the Kaldorei empire, and great cities such as Ameth'Aran and Bashal'Aran were the pinnacle of civilization at that time. Much of the coastline was destroyed in the Sundering, and it was many years before the night elves began to rebuild in the area.[2]

After the Sundering, some night elves settled in the continent's northern reaches, on and near Mount Hyjal, including the port at the mountain's northern foot. The night elves left Darkshore in the course of the Third War, moving to the safety of Mount Hyjal and Moonglade. A small number of night elves have returned to the cold and desolate beach to revive the port. They dwelled in the town of Auberdine for a time and used it as a ferry outpost. The remainder of the seaside is left in ruins.

Darkshore covers northwestern Kalimdor, and the tainted land of Felwood rises to Hyjal to the southeast. The rocky cliffs, sandy soil, and ever-present sea mist ensure that little worth noting grows in Darkshore. Kelp, seaweed, and rocks litter the beaches, and a few sparse trees dot the landscape away from the beach. Once a thriving night elf settlement, it is little more than a desolate beach dotted with ruined buildings. The weather is cold and stormy much of the time, with a wicked wind stirring up the waves. Rain and fog are prevalent for a good part of the year, allowing only the most talented sailors to navigate the dangerous waters. Shipwrecks of the less talented litter the shallower waters and beach. The night elves focused their attention on rebuilding Auberdine until that town was demolished in the Cataclysm. Most of the town was made up of new buildings, as the night elves cleared away the ruins they could not restore. Many ruins remained outside Auberdine, and harsh winds and salt water continued to corrode the once sturdy buildings. These worn pillars and crumbling structures were not totally abandoned - stories abounded that murlocs and naga were slowly taking the ruins for their own.

The night elves have a limited presence in Darkshore, spending much of their time keeping the area safe. The night elves subsist mainly on what they can catch in the ocean and what they can get through trade. When not fighting one another, naga and murlocs that lurk elsewhere in the ruins of Darkshore attack any travelers who look like easy pickings. Furbolgs inhabit a series of caves beneath the port. Uncultured but friendly to night elves in the past, their time in the ruins has turned many of them feral.[3]

A number of enemies and threats have either returned to Darkshore or arrived anew. The night elves have suffered a terrible loss already with the destruction of Auberdine, fleed up north and built a new town under the name Lor'danel, where a few Worgen refugees have also sought shelter. Many former inhabitants are dead or missing, but the night elves can spare few searchers to find them as the furbolg have reinforced and expanded their holding of Blackwood Den; satyrs and grells have taken the cave network above Cliffspring Falls; the Twilight's Hammer clan have unearthed a monstrosity within the Master's Glaive; and ghosts of the Highborne now flit through the ruins of Bashal'Aran. Keeping up with these ever-changing foes is hard enough, but there are also two more forces to contend with: the Horde and the swarming elementals.

The Horde have taken advantage of the Night elves weakening and forged an alliance with the previously secluded and pacifistic trolls of the Shatterspear Vale, whom have take invaded and overruned the Ruins of Mathystra, while the horde have established an outpost called the Shatterspear War Camp due north-east of the ruins. They've deforested much of the surrounding area, and have even razed the Tower of Althalaxx to its charred foundation. The elementals, meantime, have taken the ruins of Auberdine, making it extremely difficult to locate any survivors. Mist's Edge is dotted with hostile water elementals.

As if all these changes weren't bad enough, the destructive reach of the Cataclysm also raised a new naga settlement from the depths of the sea. Situated in the southern-most region of Darkshore along the coast, Nazj'vel waits for foolhardy adventurers to wander into its serpentine reaches.

Not is all doom and gloom. Lor'danel is strongly fortified. The Grove of the Ancients still stands, now greener than ever and slightly expanded to allow flight. In the midst of all the destruction, the great night elven hero Malfurion can be found, battling the elements and keeping them at bay.

The Horde advance through Ashenvale, intent on making their way through Darkshore, but Malfurion Stormrage manages to halt them with a wall of wisps. It is only when Varok Saurfang, Nathanos Blightcaller, and their troops attack from the north and capture Lor'danel that his blockade fails.

Darkshore is packed with dense trees, but retains a gloomy specter of what it once was. A multitude of ruins dot the landscape, all the way from the grey sand to the west, to the high mountains in the east. Swollen rivers cut across the land from north to south, and there are more than a few caves that hold dark secrets. Darkshore consists of a long strip of coastline in northwestern Kalimdor. It is sheltered to the east by mountains, which protect the wildlife in Darkshore from most the taint of the Felwood. Unfortunately the taint has spread into Darkshore via the various rivers flowing through the zone from their sources in Felwood; bringing the taint with them which is turning the land grey and dead, and poisoning the wildlife and furbolgs with an insatiable rage. Between the mountains and the beach lies a forest consisting mainly of evergreens. To the south, the forest thickens and the mountains recede, leading into the deep wilderness of Ashenvale.

The Cataclysm has hit Darkshore harder than most any other area on either continent, with few exceptions. A massive tidal wave took Auberdine from the night elves, leaving them scattered. The dock that once sat there is shattered, and its routes to Stormwind City and Azuremyst Isle shifted to the docks in Rut'theran Village, Teldrassil. The river near Bashal'Aran has flooded, wending its way eastward. Cliffspring River itself has sunk into an enormous maelstrom, and most of the roads are shattered and treacherous. Where once the great Prospector Remtravel dug, Remtravel's Excavation is now flooded.

Alliance:From Rut'theran Village in Teldrassil, the only way to reach Darkshore is by flight path. Travelers can head from Astranaar in Ashenvale and follow the road north into southern Darkshore. A long walk to the north leads to Lor'danel.

Grove of the Ancients

Alliance aligned. It provided flight paths to many areas in northern Kalimdor, and had boat access to the Eastern Kingdoms, as well as to Darnassus and Azuremyst Isle.

The Burning Crusade was released, Auberdine was made the largest boat hub in Azeroth, as its total ship route count rose to three going to Teldrassil, Azuremyst Isle and Wetlands. The last of these routes was changed to sail to Stormwind with Patch 3.0.2.

Patch 4.0.3a, none of those boat routes exist any longer. Auberdine was destroyed in the Cataclysm, and boats do not dock at the new establishment, Lor'danel. The routes to both Azuremyst Isle and Stormwind were transferred to Rut'theran Village.

Darkshore is home to several night elves of note. In the village of Auberdine, Terenthis sends promising young night elves to investigate the corruption of the local furbolgs. He is assisted in his efforts by Thundris Windweaver, who also seeks to uncover the secrets of the Highborne haunting the region's ruins. And in the Grove of the Ancients, the great Onu ponders the presence of the Twilight's Hammer cult at the Master's Glaive.

Quests in Darkshore range from level 10-31, though most fall between 10 and 20. Quests of note in this zone include locating and assisting a dwarven prospector, investigating various taints in the local wildlife, and aiding in eliminating the menace of the Tower of Althalaxx. Darkshore used to be infamous due to its multiple underwater quests, however, these quests aren't so devious now that the breath timer has been increased to three minutes.

The Grove of the Ancients

The road within Darkshore

The beach is lit 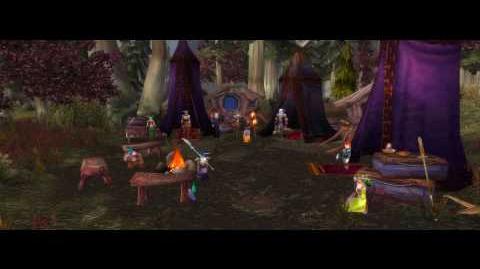 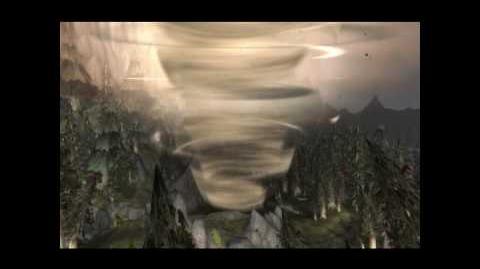 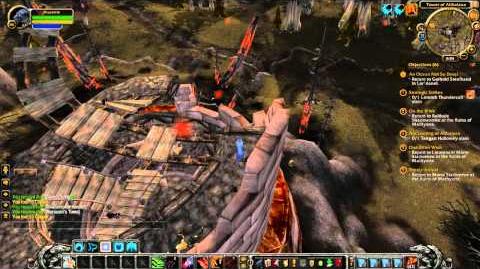