WoWWiki
Register
Don't have an account?
Sign In
Advertisement
in: Removed with Battle for Azeroth, Teldrassil subzones, Alliance cities,
and 2 more
English

Were you looking for the state after the War of the Thorns, see

Remains of Darnassus or the faction, see Darnassus (faction)?

Teldrassil
Darnassus (aka Darnassus City)[1] is the capital city of the night elves of the Alliance. The high priestess, Tyrande Whisperwind and the Archdruid Malfurion Stormrage reside in the Temple of the Moon surrounded by sisters of Elune and Draenei ambassadors.

Atop the massive boughs of the second World Tree, Teldrassil, lies the wondrous city of Darnassus. The elegant bridges, beautiful groves, and leaf-covered pathways that dot the city’s landscape are testaments to the night elves’ reverence for nature. One of Darnassus’s most notable structures is the stunning Temple of the Moon, the center of worship for High Priestess Tyrande Whisperwind and her Sisters of Elune.

Darnassus is home to night elves of all vocations, and the city has recently opened its doors to human refugees from Gilneas as well. Many of these embattled humans have contracted a strange curse that transforms them into feral wolf-beasts known as worgen. Although they’re usually reclusive, the night elves have allowed these outsiders into Darnassus because they know the perils of the Gilneans’ cursed state all too well: it was, in fact, a group of night elf druids that created Azeroth’s first worgen millennia ago. Despite the arrival of these new residents, Darnassus remains a symbol of the night elves’ rich culture and glorious history.[2]

Darnassus is the greatest city of the night elves, housing the leaders of both the druids and the faithful of Elune. It is carefully guarded by Sentinels, ancient protectors, and ancients of war. The city is formidable in spite of the peaceful natures of the night elves. In addition to the night elves, many guests and diplomats from elsewhere reside here, such as groups from the Explorers' Guild and the Knights of the Silver Hand, as well as a few representatives of the Horde negotiating peace treaties. There is only one High elf allowed within its borders. The population here is almost entirely elven, and most of the night elves are tolerant of others. However, there is political strife between the druids and priests.[3]

The atmosphere inside the city is a quiet and somewhat a melancholic one. It does not have the feeling of confinement that one would feel in Stormwind or Ironforge, where the buildings are grouped close together. Darnassus is open to the sky, and the graceful bridges spanning the lake around which it is built set the buildings wide apart. The prime reason why the city's population is so low is that it is isolated: Teldrassil is a small island away from the main mass of Azeroth, and the only way to gain access from another continent is to fly or sail to Rut'theran Village, a small settlement at the base of Teldrassil, and from there step into the glowing portal to the city proper. This is a good thing, though. It is the elves' capital, and should therefore be serene and quiet, holding the mystic and melancholic elements of the night elves.

In the aftermath of the Third War, the night elves had to adjust to their mortal existence. Such an adjustment was far from easy, and there were many night elves who could not adjust to the prospects of aging, disease and frailty. Seeking to regain their immortality, a number of wayward druids conspired to plant a special tree that would reestablish a link between their spirits and the eternal world.

With Malfurion Stormrage missing, Fandral Staghelm — the leader of those who wished to plant the new World Tree - became the new Arch-Druid. In no time at all, he and his fellow druids had forged ahead and planted the great tree, Teldrassil, off the stormy coasts of northern Kalimdor. Under their care, the tree sprouted up above the clouds. Among the twilight boughs of the colossal tree, the wondrous city of Darnassus took root. However, the tree was not consecrated with nature's blessing and soon fell prey to the corruption of the Burning Legion. Now the wildlife and even the limbs of Teldrassil are tainted by a growing darkness.

The defenses are spread out due to the water that surrounds a town. A death knight with Path of Frost can easily get a whole raid in the water and to the temple, passing all guards. However, Darnassus does boast the traditional sentinel guards in most locations, and some elite hunters prowl the city on impressive catlike mounts. However, the city is almost completely abandoned by high-level players, who typically congregated in places like Dalaran during

Wrath of the Lich King and now mostly Stormwind City since

Normally players don't heed the warnings of an advance. Unless you're on an RP server, most really don't care about what happens to Darnassus. Though some people do like this city and manage to defend it, the Horde can easily raid it with enough players even during peak hours.

There is a second route into Darnassus for sufficiently devious Horde players. By using an elixir of Water Walking, a Horde player with a fast land mount can cross from Darkshore to the outskirts of the great island tree where Darnassus is located. By running up the tree, then jumping off onto one of the lower roots, the toon will die and be brought to the graveyard inside the tree. By accepting local resurrection and waiting out the resurrection sickness, the Horde toon can gain access to the island and all its territories without encountering any guards at all.

Darnassus is arranged in a few terraces on the north, east and southern sides of a central lake area.

From the Temple of the Moon, the high priestess Tyrande Whisperwind rules alongside her husband Malfurion Stormrage with the support of her fellow priestesses of the Moon.

Portals (in the Temple of the Moon)

The boat pier is at Rut'theran Village.

There are a few Repeatable Reputation Quests (RRQs) which raise Darnassus faction and increase reputation:

Darnassus will gain a small worgen district, known as the Howling Oak.[4]

In an attempt to strike a permanent, disabling blow against the Alliance, Sylvanas Windrunner has Teldrassil set aflame. All within that could not escape in time, including those in Darnassus and its surrounding areas, die in the inferno. What remains is still on fire, destroyed. 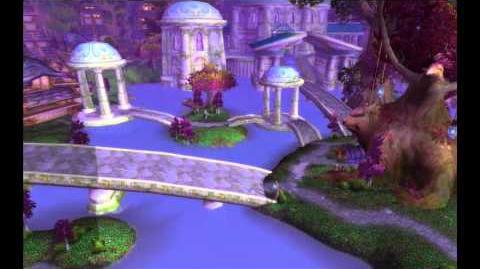