WoWWiki
Register
Don't have an account?
Sign In
Advertisement
in: Removed in patch 4.0.3, The Deadmines subzones, The Deadmines,
and 4 more
English

For the new level 85, heroic mode version, see the Deadmines.

The Deadmines are expansive, winding tunnels dug out under Westfall and part of northwestern Stranglethorn Vale. It is the lowest-level Alliance instance, and is populated by members of the Defias Brotherhood. Its entrance can be accessed in the town of Moonbrook in southwestern Westfall, while its exit is located in the western part of the Dagger Hills near the ocean. The Deadmines is the center of the Defias operation, led by the ambitious Edwin VanCleef, who is constructing a juggernaut at the bottom of the mines with the aid of the goblins. Many quests occur in and around the Deadmines.

Prior to the First War, the Deadmines were the greatest gold-production center in human lands. However, they were abandoned during the First War. During that time, Lord Lothar ventured into the perilous Deadmines on a quest to obtain the Tome of Divinity, but was captured by a band of ogres and held captive for 20 months. He was ultimately rescued and successful in his mission.

It was also to the dungeons below the Deadmines to which Blackhand's daughter Griselda fled with the ogre Turok. Both were slain by an Orcish raid. At that time, many slimes inhabited the dungeons, but have not been encountered lately.

The first boss you encounter is the ogre Rhahk'Zor. He is a level-20 Elite, hits quite hard, and has high amounts of armor. He has two Defias Watchmen in his room.

The instance is populated with non-Elite Defias Strip Miners, and level-18 or -19 Elites.

After fighting Rhahk'Zor, you will fight more Defias Miners, Defias Overseers, and Defias Evokers. You will then enter the Mast Room where goblin carvers are working on a mast for the dreadnaught. Sneed and his Shredder are the bosses here. He is level-20 elite. Sneed's Shredder is immune to burn, bleed, and concussion effects. After destroying his Shreeder, Sneed himself will jump out and attack you.

Immediately after Sneed's Shredder, you will then fight level 18-19 Defias Strip Miners. It also has two kinds of level 18-19 Elites: Defias Taskmaster and Defias Wizard. You will then enter the Goblin Foundry, where the goblins are busy creating anchors and cannonballs for the Defias Dreadnaught. The Goblin Craftsman can be found there, along with the Goblin Engineer that can summon a Remote-Controlled Golem, which will fight alongside them. Gilnid is the boss here. He comes with 3 adds. Killing him opens the door to the next area.

You will fight more Defias Strip Miners, Defias Taskmasters, and Defias Wizards, and eventually come to an alcove which contains Defias Gunpowder. This should be looted as it is required to open the door to the docks. A Rogue can also attempt to pick the lock on the door.

If the party elects to blast open the door, you will alert Mr. Smite, the tauren First Mate, who will send Defias Pirates to see what the disturbance was. If you pick the lock instead, you will not alert them.

Mr. Smite is the next boss. All adds should be cleared from the area (the ship ramp) before you engage him. There are two stealthed Elites (Defias Blackguards)) at the bottom of the ramp. These should be eliminated before taking Mr. Smite on. Mr. Smite will perform a Warstomp and stun the entire party at 75% and 50% health. This stun cannot be interrupted or avoided. A notable exception to this is if a Hunter has maxed out his Hawk Eye talent, allowing him to snipe Mr. Smite at max range, allowing DPS to continue to do damage, and hopefully not pull aggro if the tank had built enough. Any adds still alive will continue to attack the party. Mr. Smite will run over to his chest, and take out a new, stronger weapon, and attack the party again.

The ship contains level-19 Elite Goblin Shipbuilders, Defias Pirates, and Defias Squallshapers. The boss at the top is Captain Greenskin, the ship's captain. He comes with two adds.

The final boss is Edwin VanCleef. He is a level-20 elite. He is hiding in the cabin on top of the ship. Attacking him will bring his two guards out as well. He can stun, and will summon more adds as his life gets low. The other boss is optional. After killing VanCleef, you can jump down the other side of the ship, and find more Defias. You will also find Cookie, a level-19 elite Murloc who is also the ship's cook. After leaving the ship, you can continue to go up the path into the tunnel, which leads to the instance exit.

The Deadmines are home to the notorious Defias Brotherhood, and several of its more important members are stationed here.

Gilnid the smelter presides over the goblin foundry, and

Captain Greenskin patrols the ship itself, where

Edwin VanCleef himself rules from the ship's cabin. 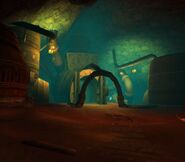 In World of Warcraft: Cataclysm Deadmines will be completely revamped. With the Defias no longer an issue, a new boss and enemies will appear in this location. The dungeons level range will be slightly adjusted to 15-21 and also will gain a heroic mode for level 85 players.[1]

Previously during BlizzCon, it was stated that "Edwin was back, and he's VanCleef-ier than ever..." and that a heroic version of Deadmines would be added for high level players.

While the heroic mode is still happening, Edwin VanCleef will mostly likely not return, but probably will be replaced by his daughter instead. However, in the current build of beta, the heroic guild achievement for Deadmines requires you kill "Captain" Cookie. It appears as if after VanCleef's death, the murloc instituted a mutiny and took over.