Deathknell is a small Forsaken village nestled in a well guarded valley just north of Silverpine Forest in Tirisfal Glades, which serves as the starting area for the Forsaken. There, dead bodies from all over Azeroth are being shipped in, and Val'kyr give the gift-- and curse-- of undeath to them. The Dark Lady and her people are desperate for new "recruits."

One of the greatest struggles for the citizens of Deathknell is obtaining the natural resources they need to survive, particularly gold. The goldmine to the northwest has been overrun by spiders, and the people of Deathknell frequently attempt to clear it out so that they may begin mining its precious metals. In the meantime, they do what they must to survive in the face of the Scourge and the Scarlet Crusade.

Lore-wise, Deathknell is unique among Forsaken sites due to its name. While other communities inhabited by the rebel undead of the Banshee Queen retained their names from their days as centers of human civilization, Deathknell was obviously renamed to its current appellation for reasons unknown. The valley itself is guarded by a number of Deathguard Elites.

The church of Deathknell is one of the main bases of the Forsaken cult of the Forgotten Shadow.[1]

It is possible that this is the same village as Vandermar Village.

The primary threat to the town of Deathknell are the Scourge or, as the citizens of Deathknell refer to them, the "Mindless Ones". The northern part of the village has been overrun by Scourge, and the Forsaken have entrenched themselves in the south as best they can, frequently sending out assault parties to drive the Scourge back and search for equipment in the abandoned town.

A detachment of the Scarlet Crusade has set up camp southeast of the village and stages frequent attacks against the citizens of Deathknell as well as against the Scourge. Vital information often passes between this encampment and the Scarlet Monastery far to the east, leading many to question the exact motives of the human forces in the area.

Mobs found in and around Deathknell 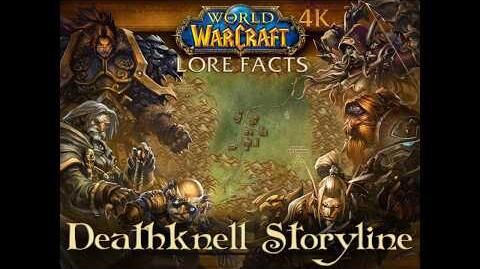 From the offical bonus map:
Pockets of deep water have complicated the process of getting around in this wooded region. It may prove simpler to seek out air transportation.