Between Ironforge and Stormwind City

The Deeprun Tram is a long, fully enclosed, underground (and partially underwater) set of double tracks upon which rolls two sets of three wagons, all credited to the gnomes' technical engineering. The service is fast and smooth, and is provided free of charge to travelers between the Alliance-aligned cities of Ironforge and Stormwind City. There is also a quest here that starts on the Ironforge side and ends on the Stormwind side that involves catching rats.

In the aftermath of the Second War, the humans of Stormwind began the grueling task of rebuilding the war-torn lands surrounding their battered kingdom. In those days, the bonds of brotherhood that cradled the Alliance were still at their strongest, and the dwarves of Ironforge were quick to lend aid to their human allies. King Magni Bronzebeard was frustrated, however, at the sluggish pace with which his country's aid was being delivered to Stormwind, and eager as well to establish a means of reinforcing the human kingdom with dwarven soldiers should the need arise. To address these two concerns, King Bronzebeard turned to Azeroth's most esteemed engineer, High Tinker Gelbin Mekkatorque, who immediately began drafting designs for a grand subterranean railway system that would link Stormwind and Ironforge.[1]

Whilst the Deeprun Tram was being built after the Second War, Mekkatorque and his teams came across a rat problem. Rats being proportionately larger to gnomes than to the other Alliance races, many brave gnomes were lost to those vile creatures whilst constructing.

Gnomish inventors organize into pairs, an odd crazy-guy / sane-guy relationship. One is always trying to push the limits of his devices to unknowable extremes while the other does everything he can to keep the invention from becoming disastrous. It was two pairings of just this type that created the underground railroad that connects Ironforge to Stormwind.[2] It is, however, unclear of which member Gelbin represented in his pair, the "crazy" one, or the "sane" one. Its also possible he was just the designer, and/or acted as a supervisor while the four gnomes worked under him.

Today, his vision has become reality, and the newly-built Deeprun Tram has developed into an indispensable link between the two great capitals, providing swift and safe transportation for thousands of their citizens, and bolstering military cooperation between the armies of these two proud Alliance strongholds.[1] 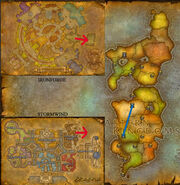