For the Warcraft III unit, see Demon Hunter (Warcraft III).
Not to be confused with speculation on the model name from in-game files, demonhunter.

The demon hunter is the second hero class in World of Warcraft. Demon hunters start at level 98[1]; at the end of their starting experience they will have reached level 100 and can delve immediately into Legion content. They use fury or pain for their abilities. While in lore, any race can become a demon hunter, in World of Warcraft: Legion, the demon hunter class is only available to night elves and blood elves. They are able to wield warglaives, fist weapons, one-handed axes, and one-handed swords, and they wear cloth and leather armor.

Each player account is only allowed one demon hunter per realm and the player must have a level 70 character already on that realm.[2]

The demon hunter character's story begins 10 years prior to the events of World of Warcraft: Legion. It is revealed that Illidan sent his elite demon hunters through a portal to the Legion world of Mardum prior to his defeat within the Black Temple. Players progress through this area, and when they return triumphantly to Outland, they are captured by the Wardens and imprisoned within the Vault of the Wardens. They are awoken by their desperate jailers during the Legion's third invasion.

Drawing on fel forces to fuel their attacks, demon hunters pursue their prey with uncanny agility, dodging away from danger and closing on enemies in the blink of an eye. These melee-focused assassins unleash pent-up fury in the form of devastating attacks—even metamorphosing into terrifying demonic forms in moments of great need.

Demon hunters are dark, shadowy warriors who are shunned by greater society. They made a pact, long ago, to fight against the forces of chaos using its own terrible powers against it. These mysterious warriors ritually blind themselves so that they develop 'spectral sight' that enables them to see demons and undead with greater clarity. They wield demonically charged warglaives in battle and even call upon demonic energies to augment their formidable combat skills. Although they are counted as some of the mightiest warriors within the night elves' society, the demon hunters are always maligned and misunderstood for making their selfless pact with darkness.[3] (WC3MP 56) Though many among the night elves and the Alliance fear the demon hunters and their pact, all know that demon hunters and their demonically-charged warglaives have played an important part in combating what remains of the Burning Legion.[4]

Illidan Stormrage is the most famous demon hunter and was the first of their kind. Even Illidan's own brother did not appreciate his sacrifice, locking him below ground for ten thousand years for trafficking with dark powers and creating a new version of the Well of Eternity. Illidan's creation was unique. Sargeras, lord of the Burning Legion, burned away Illidan's eyes with magic fire until only scorched sockets remained. Illidan's resulting sight was a maddening display of violent colors. His altered vision allowed him to easily recognize both demons and mortals with magic powers. In addition, Sargeras covered Illidan's body with black tattoos that increased his arcane power.[5]

Later, a group of night elves, inspired by Illidan's example, made a pact to turn the Burning Legion's powers against it, fighting destruction with destruction. Obviously they could not gain their powers in the same way Illidan did, but they discovered other means. In the millennia since, other night elves, and a few creatures of other races, have made the same pact, binding demonic essence in their bodies and using it to destroy the Legion's minions.[5]

Demon hunters have a variety of abilities that assist them in destroying demons, though the power coursing through their bodies also allows them to prevail over lesser foes. Demon hunters eschew heavy armor, valuing mobility and speed. As a demon hunter grows in power, they undergo a gradual evolution, becoming more and more demonic in appearance. The changes are cosmetic and can take many different forms, from burning eyes to black blood. By the time demon hunters reaches the pinnacle of their development, they are a twisted and dark version of their former selves. Though the chaotic energy in their body does not affect their personality or allegiance (so the demon hunters claim), it wreaks great changes on their physical form. Their gradual evolution achieves its pinnacle as they become a demonic entity. Their appearance has changed to something frightening: changes can include glowing red eyes, horns, clawed feet and hands, wings, cloven hooves, a spiked tail, dark skin, a deep, rumbling voice, and similar cosmetic changes. The demon hunter becomes an outsider.

Demon hunters can drain a demon’s energy to fuel their own powers. They mainly use fel and shadow energy. They can channel the chaos energy within them into a melee weapon to increase its powers. In time they become more proficient in channeling demonic energy into their weapons, and highly skilled demon hunters are adept at this technique.

Demon hunters have shown the ability to cover their bodies in a shell of flame. They can also unleash the demon in them and temporarily turn themselves into something more.

Though equipment obviously varies between them, one universal element of the order seems to be the blindfold. Used to conceal the remains of the demon hunters' mutilated eye sockets, the demon hunter blindfold is usually some dark but mundane-looking fabric. Blindfolds are occasionally neglected, perhaps to make the demon hunter appear more frightening and intimidating.

A second common occurrence among demon hunters is the tendency for males to be stripped to the waist, which is just one display of the demon hunters' emphasis on the importance of agility and general rejection of heavier armor. Those female demon hunters that have surfaced have been similarly garbed, wearing only the bare minimum of clothing on their upper bodies, sometimes even nothing at all. Demon hunters further tend to wear what appears to be cloth or leather, favoring greater speed and agility on the battlefield. 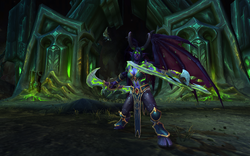 Demon hunters carry large, curved warglaives in the style of Illidan Stormrage's Twin Blades of Azzinoth. Though the exact reason for this tendency isn't explained, there are several possible reasons. One is that this kind of weapon has simply become a tradition over the years, later demon hunters mimicking the first of their kind. Another is that this style of curved warglaives is common among the kind of demons that demon hunters have to kill as part of their basic initiation process. A third explanation is that the dual-bladed nature of their large, curved weapons allows them to deal the most damage with the least amount of effort, allowing them to focus on their agility and speed. A final explanation is that this kind of weapon is somehow easier to magically charge or channel through.

These blades appear as a strange cross between a small buckler and a sharp-looking, curved, two-bladed short sword. The demon hunters of the night elves wear these blades while they hunt the minions of the Scourge, the Burning Legion, or other dark adversaries. While many demon hunters rely on non-magic weapons, eventually most have either one of these double blades or a matching pair.[8]

The use of such weapons tells a lot about the individual wielding them. The inwardly-curving nature of the blades means that demon hunters must get extremely close to their opponent in order to get maximum use of the blades. The glaives would be swung in wide arcs at extreme speed, viciously lacerating the foe. More often than not, the warglaives will have intricate serrations on the outer edge of the blade near the central buckle, adding yet another facet to the brutal nature of the weapons. 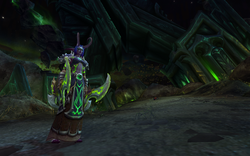 Night elf society shuns demon hunters. Most night elves don't understand the noble sacrifice that demon hunters make; therefore, they make another sacrifice: to be outcasts from their society. Other cultures share the night elves' distrust of demon hunters, and the shadowy individuals are not welcome in cities throughout the Alliance or Horde-controlled lands. Citizens and soldiers may allow a demon hunter to stay at an inn or take a brief rest at a tavern, but they watch them warily and breathe sighs of relief when they leave. These people do not see demon hunters for the heroes and martyrs they are; they see them as dangerous individuals who consort with dark powers, almost as bad as warlocks. Such ignorance embitters many demon hunters, and most are solitary souls. Some are fortunate enough to find the company of a few individuals who appreciate them, or at least show them little ill will. Recently, knowledge of a secret order of demon hunters has come to light. Little is known of who they are, but they call themselves the Dark Embrace. Hints of their path have surfaced in the days following the Cataclysm, rumored to be found in the bleak lands of Darkshore and the tainted glades of Felwood.[5]

In World of Warcraft: Legion, only night elves and blood elves have the ability to become demon hunters.

In lore, any race can become a demon hunter, though almost all demon hunters today are night elves, with a minority of blood elves.[5] The tradition of demon hunters arises from night elf history; a few blood elves have made the pledge as well, seeking revenge for the destruction of their home.

Demon hunters in other races are rare, but some exist.

Unlike other classes, demon hunters have unique character customization features that include the following:

Demon hunters can command chaotic energies to inflict havoc on enemies, or they can focus their powers to resist damage and fuel vengeful attacks. Demon hunters heal using the souls of those they've slain. 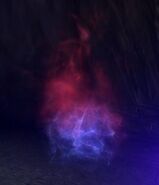 As Demon Hunters may only wear up to Leather armor, Leatherworking and Skinning may be a good choice. It is unknown at this time if Blacksmithing will receive plans for new Demon Hunter weapons, so this may be a sub-optimal choice. Lore wise, Enchanting would be a decent choice as well, as they would have an implicit understanding of the magic involved in destroying or imbuing an object with arcane energy. 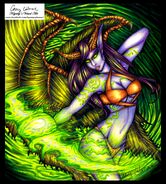 Journey of a Drunken Panda (blog) 5 reasons why Demon Hunter will never be a class in WoW by Mason Easley Thursday, January 24, 2013

15 Minutes of WoW (blog) Daily Thoughts: Why Demon Hunters Will Never Be A Class October 16, 2012