Constructs are constructed creations that can be - or are - destroyed over time or outright obliterated.

Arcane constructs are creatures spawned of pure mana and intellect. In the right hands, a construct allows its user to quickly assimilate vast riches of arcane knowledge.[1]

Fel constructs such as infernals are creations constructed with matter and fel energy.

Death, in the form of necromantic magic, can be defined as the destruction of the mortal body and it pushes everything towards a state of entropic decay and eventual oblivion.[2] Entropy, as it can be defined, is the representation of the unavailability of a system's thermal energy for conversion into work, often interpreted as the degree of disorder. Order, in reality, is most commonly perceived as arcane magic, which necromancy is a school of.[3] However, this does not mean order is always perceived as arcane magic. This type of energy is innately volatile, and wielding it requires intense precision and concentration. Now, conversely, disorder is manifested as highly destructive fel magic, a brutal and extremely addictive energy fueled by drawing life from living beings.[4]

Demons are evil immortals who feed upon life and magic.[5] They had been formed as a result of the Light and Void energies that had bled together at the borders of the Twisting Nether. Held in the thrall of unbridled hate and malice, they hungered for nothing less than the destruction of all life in the universe.[6] 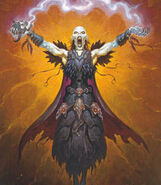 Jeremiah Karvok: "My methods can be quite disturbing, but I challenge you to question my results."

Mazar: "Many authorities on fel magic have thoroughly calculated that it will ultimate consume all who attempt to master it. Until that day arrives, though - wohoo!" 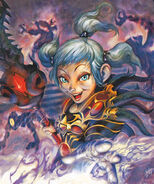 Rinni Gloomtrik: "So far, the Scourge have not impressed me much. They are no safer from my demonic powers than a living soul is."

Warlocks are magical practitioners who seek to understand darker, fel-based magics, including destructive spells.[7] Warlocks who command the power of destruction favor incantations of pure chaos and aggression in battle. In this regard, they’d find a stronger kinship with fire mages than warlocks of other disciplines—if not for their propensity to make use of magic deemed detestable by all mage orders. The destruction warlock is well-versed in discharging a dizzying array of shadow, fel, fire, and chaos magics upon opponents that rattle souls and conflagrate bodies. They require little motivation for the havoc they wreak, happy to revel in the destruction they cause—thrilled at any opportunity to watch the world erupt in discord around them.[8]

This tree's emphasis is to improve the Warlock's ability to do direct damage as opposed to damage over time and greatly enhances their ability to do burst damage. It mainly affects Fire spells, but is not restricted to them.

This tree provides the warlock with four spells that are exclusive to it: Chaos Bolt, Conflagrate, Shadowburn and Shadowfury. The last 3 are instant cast direct damage spells; Chaos Bolt on the other hand has a cast time, but is the single hardest hitting spell in any Warlock's arsenal. With the inclusion of Death Coil and Shadowflame, Destruction warlocks end up with five instant cast spells. This makes them quite versatile when dealing with foes.

The warlock who chooses the path of Destruction becomes an instrument of heavy artillery. Capable of dealing massive amounts of damage over a very short period of time, but sacrificing some of their survivability in the process; their role in a battle is to either stand back and help finish off enemies one at a time before they can be healed, or charge into a melee and completely disrupt a battle, usually at the expense of their own life.

Destruction is often the spec of choice for Warlocks that would rather do heavy direct damage themselves. It is often perceived as the best spec for PvP as it gives you the tools to quickly finish off a foe. However, its usefulness in arena play, especially in 2v2, is debated. Unlike the Affliction and Demonology trees, Destruction offers very little in terms of survivability or damage mitigation — two valuable assets in arena. The tree is clearly focused on damage. The introduction of resilience took quite a bit of punch out of Destruction's PvP appeal. Moreover, many of its spells have longer cast times than the DoTs of Affliction which gives opponents the opportunity to interrupt your spellcasting.

For raiding, Destruction is valuable bringing very strong DPS to a fight, along with an Imps Blood Pact and Replenishment through Soul Leech. DD locks are often at the top of DPS ranks in raids.[9]

EDIT: The following is not so true with the above: Destruction spells are mana intensive so it is vital to manage mana efficiently.