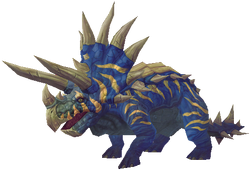 Though hunters can respec their pet devilsaurs into Cunning or Ferocity , they are inherently Tenacity. In addition to the abilities that come standard with all pets ([Growl] and [Avoidance]) and those given to their natural or retrained specialization, all devilsaurs are given the following:

While mostly comparable to the iconic Triceratops dinosaur, Direhorns actually combine visual elements of several ceratopsid and ankylosaur genera, such as Triceratops, Styracosaurus and Ankylosaurus. They are also similar to Stegadons from Warhammer Fantasy Battles, which also are a combination of aforementioned genera.