For the NPC in Thousand Needles, see Dog (NPC). 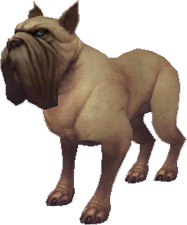 Dogs are domesticated canines. Fairly small dogs can weigh between 20 to 50 pounds in weight. Dogs generally hunt in packs, chasing and exhausting prey until they can drag it down. They can jump fairly well, and survive well when tracking by scent.[1] (MGWS 9)

In World of Warcraft, a number of creatures share the appearance and/or role of dogs. In particular, the hunters of many races can tame wolves and associated beasts for use as pets or tracking hounds. Darkhounds are in fact demonic dogs, and are used as guard dogs by the Dark Iron dwarves in Blackrock Depths.

Though hunters can respec their pet dogs into Cunning or Tenacity, they are inherently Ferocity. In addition to the abilities that come standard with all pets ([Growl] and [Avoidance]) and those given to their natural or retrained specialization, all dogs are given the following:

Dogs are found throughout the Eastern Kingdoms, Kalimdor, and Northrend.

Other species are described in Manual of Monsters Appendix Three: Albadian Battle Dog, Cooshie, Death dog and Moon dog; however the validity of the source is disputed.

The subspecies below can be tamed by hunters. Note that worgen start with a mastiff.