Doomwalker is a powerful Fel Reaver sent by Kil'jaeden to assault the gates of the Black Temple in Shadowmoon Valley.[1]

The cunning mo'arg engineers of the Burning Legion pushed their gan'arg workers for weeks in the construction of the first fel reaver, a massive construct that could easily raze fortified towers or tear the wings off an airborne gryphon. Though pleased by the success of their construct, the engineers quickly realized that they could improve upon the design. While the forge camps began to mass-produce these fel reavers to smash the mortal forces of Outland, all the manpower of the mighty Legion Hold in Shadowmoon Valley was dedicated to the creation of a superior machine.

Now unleashed, Doomwalker rages throughout Shadowmoon Valley, annihilating everything in its path. Infused with the captured souls of martyred draenei, the Doomwalker is empowered with unparalleled fury and might. With the fortified strength of its gargantuan body and the unbridled power of countless tortured souls, this newest fel reaver is among the most powerful weapons of the Burning Legion.[2]

It is an 71* Elite (Boss), and has exactly the same abilities as the normal Fel Reaver except from the overrun ability that is described below. It is much stronger and hurts a lot more. He can crit tanks for 15k. It is interesting to note that this boss used to patrol the zone on the Burning Crusade Beta, but this function was later removed due to complaints.

* It is actually not possible to see the level, as he is a Boss.

Earthquake
2k physical damage every 2 seconds (total 8k physical damage). He will be stunning everyone for the duration of this spell. This stun can be avoided with any kind of shield. The damage will hit players flying overhead, as well, but again, avoiding the stun. [1]

Chain Lightning
This appears completely random. It damages the first target for estimated 2k damage. It will jump like normal chain lightning to anyone within 5-10 yards doubling the damage for every hit! (spread out)

Overrun
Randomly charges people, they get knocked back. This appears to wipe the aggro. Best countered with tanks being ready to pick him up. He will do this spell several times in a row until he is picked up. Buff described as "Increases run speed by 100%" Lasts 5 seconds

Enrage
When Doomwalker's health drops to 20% or lower, all physical damage it deals is doubled.

If you are killed by Doomwalker you gain the debuff "Mark of Death". This debuff (similar to the Dragons of Nightmare bosses), means that you can only attempt this boss once every 15 minutes.

It is possible to solo Doomwalker at 80 with end game raid gear, but is highly dangerous. As with most such adventures, it requires a balance of damage and self healing ability. As well, there are occasional people leveling in the zone, which on PvP servers may lead to ganking.

A usual minimum approach is to have separate well geared Tank and Heals, with as many DPS (optional) as want to come along. Making use of his large aggro radius and position can help offset the chance of a chain lightning jump. When casting earthquake, all players will be stunned, but only around 8k damage is dealt. Most topped off players will survive and this can be healed through. Recommended you save your cooldowns for when it enrages at 20% health remaining, since all damage at that time will be doubled, and this will be the most likely cause of a wipe.

Doomwalker will drop 2 lv. 70 BoE and around 500 gold. He can be downed within 10-25 minutes depending on performance and attendance. 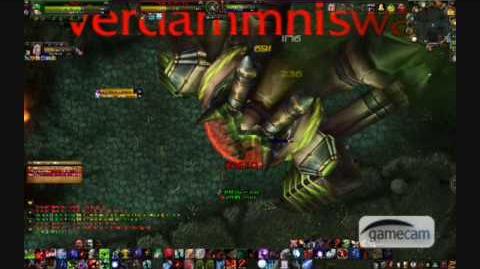 Patch 2.4.0 (25-Mar-2008): Loot dropped by Doomlord Kazzak and Doomwalker has been changed to Bind on Equip. In addition, the cash dropped by these bosses has been significantly increased.