Dragon turtles are pandaren racial mounts. They have a primal and fearsome appearance. Though squat, it stands 10 feet high. Some naga captured and trained a few dragon turtles to augment their soldiers, but this tactic is not widespread. Though some thought turtles were slow and unimpressive, this creature proves them wrong.[1]

The pandaren have long sought mounts that embody their values: patience and strength. With a naturally armored hide, even gait (no matter how heavy the passenger), and the relaxed attitude that welcomes long journeys, the Dragon Turtle is perfect for the pandaren adventurer. Indigenous to mainland Pandaria, these fine steeds are easily outfitted with the essentials: maps, cushions, footstools, and brew-storage. Comfortable and hardy, the dragon turtle’s slow, even stride will gently ease passengers into new parts of the world and/or a relaxing nap time.[2] 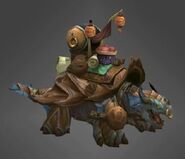 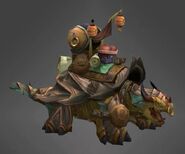 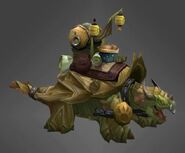 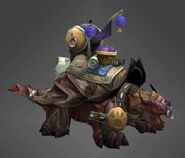 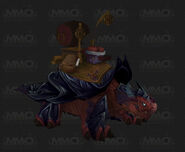