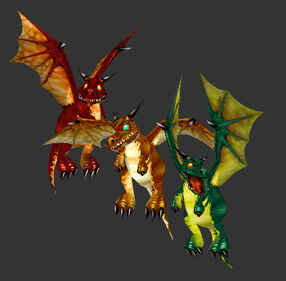 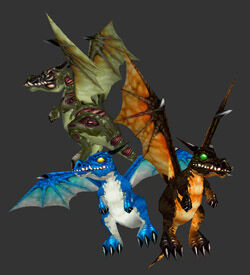 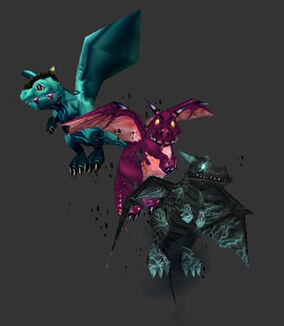 Dragon whelps (aka dragon whelplings, dragonlings, or broodlings) are the smallest member of the dragonkin species, representing the offspring of a brood. And as a result, are easily the weakest variation of dragons. In most cases however, where there are whelps, their larger cousins are always close by.

Dragon whelps come in a variety of colors and are found in many different locations.

Even smaller and weaker than dragon whelps, are dragon whelplings. These are pint-sized companion dragons that in most cases, are dropped by the dragon whelp versions of themselves.

All whelpling pets (except the Netherwhelp, Frosty, Lil' Deathwing, and Onyxian Whelpling) have a 1 in 1000 chance of dropping, according to Eyonix.[2] The table below shows the cumulative probability of getting at least one after a number of kills. 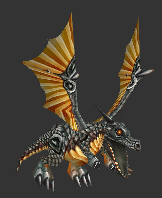 Mimicked to represent dragon whelps, engineers have developed schematics to create a mechanized version of these tiny dragons known as dragonlings. Unlike whelp companions however, dragonlings will fight for you, are only temporary, and are restricted to engineers.