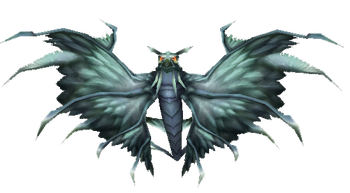 There are two kinds of creatures called dragonhawks in Warcraft lore.

Dragonhawks are vicious flying predators. They are swift and deft, able to crack bones and pierce hides with their mighty beaked jaws. They can be trained as aerial mounts and seem to have a particular affinity with high elves (and now blood elves), and are often trained by them. Majestic and magnificent creatures, dragonhawks and their elf riders, resplendent in lacquered dragonhide armor, make an impressive sight.

This large raptor could carry away a man - on its back, or in its talons. These hawk-like creatures are impressive. Its feathers show brilliant streaks of color on its wings and tail, but its most remarkable feature is its head, which seems like a combination of an eagle and a dragon. Its strong beak gleams wickedly. Straight, colored horns that match its plumage sprout from the beast's head.

As their name implies, dragonhawks resemble a cross between a hawk and a dragon. They look much like large hawks with dragonlike heads and a few other draconic characteristics - long neck, sleek body and large wings. Dragonhawk plumage is brown with touches of blue and red.

Dragonhawks are able predators. They prefer diving attacks, snatching prey in their talons to devour at their leisure. When trained, they readily fight in tandem with a skilled rider.[1] (LoC 190)[2] (APG 205)

In the game, dragonhawks were introduced in the Burning Crusade expansion. They are seen mainly in Eversong Woods, but stronger dragonhawks are found in Tempest Keep, Zul'Aman, and Shadowmoon Valley.

Dragonhawks are very rare indeed, and they are most often seen in Eversong Woods, home of the blood elves. Beautiful creatures, dragonhawks are sought after by hunters from around the world.[3] (WoWTBCOSG 317)

The dragonhawk is the blood elf hunter's starting pet. Though hunters can respec their pet dragonhawks into Ferocity or Tenacity, they are inherently Cunning. In addition to the abilities that come standard with all pets ([Growl] and [Avoidance]) and those given to their natural or retrained specialization, all dragonhawks are given the following:

In Patch 2.4.0, the Isle of Quel'Danas was opened. Dragonhawks are used as the main taxi from the island to the mainland, as well as for bombing runs in the Dead Scar and on the Dawnblade flotilla off the northern coast. In Patch 2.4.3, dragonhawks replaced the bats at the Silvermoon City and Tranquillien flight paths. This was the original intention for the Quel'Thalas flight paths, but around the time BC was released, guards would say that the Silvermoon flight master was tending to the dragonhawks. As draenei did not receive their own special fliers (given hippogryphs instead), blood elves were originally given bats.

A rideable dragonhawk was made available as of 3.0.8 as a reward for completing the

In patch 3.2.0 horde players were also given the Sunreaver Dragonhawk as a reward from the Argent Tournament. It costs 150 Champion's Seal and requires you to be exalted with the Sunreavers.

Community content is available under CC-BY-SA unless otherwise noted.
... more about "Dragonhawk"
RDF feed
Patch date
May 22, 2007 +  and October 14, 2008 +
Advertisement