Draka or the alternate timeline version that appears on Draenor, see

Drakan, the Alterac Valley worg or

The courageous warrior mate of Durotan, Draka was a firm believer in the Frostwolf clan's convictions of the old ways of honor and shamanism. She was the daughter of Kelkar by his mate Zuura, and the granddaughter of Rhakish.

Draka met Durotan as he and Orgrim Doomhammer stared in awe at Draka. Durotan was slack-jawed when she refused his courtship hunt invitation, but accepted one that meant nothing more than a simple hunt. At the time, Draka was too young, the reason of declining Durotan's first offer. Whilst trailing a Clefthoof, they were attacked by a black wolf. After killing it, Draka revealed that she was of age to "date" on that day, and romantically kissed Durotan.

Draka birthed Thrall, child of Durotan, shortly before joining her chieftain on his excursion to the southern lands to meet with their old comrade Orgrim Doomhammer.[5]

After explaining to Doomhammer the deception of Gul'dan, Durotan and Draka were sent away to safety with one of Doomhammer’s guards, but the guard betrayed them to the assassins of the Stormreaver clan. Draka was killed in the encounter.[6]

See Durotan's death discrepancy for confusion on the death of Draka and Durotan.

In A Warrior Made

Draka will appear in the new movie played by actress Anna Galvin.[7] According to sources, Draka is pregnant and gives birth to Thrall.[citation needed]

Draka as seen in Warlords of Draenor.

Draka and Thrall (Warlords of Draenor) 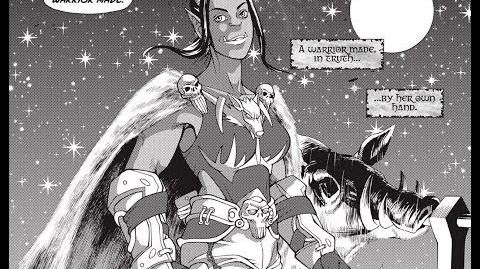 The Story of Draka Lore