Drake mounts are epic flying mounts available to players in a few different ways. Both Alliance and Horde can acquire these mounts. With the release of the

Warlords of Draenor expansion, players are now able to earn a bonus drake as a reward for the achievement

Awake the Drakes. This involves gathering several of the drakes from this list.

The majority of drake mounts are available as loot items from various dungeons and raids.

Infinite Corruptor in the Culling of Stratholme on heroic mode. But it only drops if you defeat the Corruptor within the 25 minute time limit. The timer begins as soon as you talk to Arthas, just inside the gates of Stratholme.

The Black Drake drops from 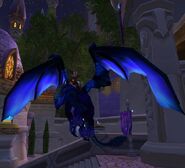 The Azure Drake can be found inside Alexstrasza's Gift after defeating 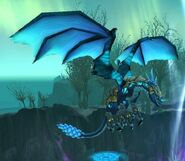 Ley-Guardian Eregos inside The Oculus. It was previously dropped in the 10-man version of The Eye of Eternity but was moved to The Oculus in 3.3.2. to encourage players to complete the instance instead of abandoning it.

The Onyxian Drake drops from 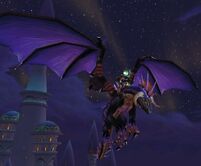 The Vitreous Stone Drake has a rare chance to drop from

Slabhide in either normal or heroic mode.

Altairus in either normal or heroic mode. 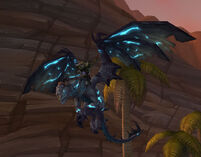 Drake of the North Wind

Throne of the Four Winds

Al'Akir in either normal or heroic mode.

Drake of the South Wind

This raid contains three separate drake mount drops, all of which have extremely low drop rates (less than 1%). Experiment 12-B is a drake of the Chromatic Dragonflight which is sometimes found in the "Lesser Cache of the Aspects" after defeating

Deathwing encounter on either heroic or normal, whereas the Life-Binder's Handmaiden has a chance to drop off Deathwing in heroic mode only. 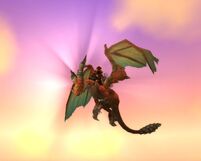 The Infinite Timereaver has a very small chance to drop from each boss in a Timewalking dungeon. However, these dungeons may only be run while a week-long Timewalking Dungeon Event is happening.

The Phosphorescent Stone Drake drops from the rare mob Aeonaxx in Deepholm.

Drake of the East Wind 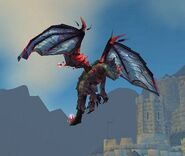 Players who have gained Exalted status with the Wyrmrest Accord (based in Northrend) can purchase the Red Drake from Cielstrasza <Wyrmrest Accord Quartermaster>.

Players who have gained Exalted status with either Baradin's Wardens or Hellscream's Reach (based in Tol Barad) can purchase a Drake of the West Wind from the faction quartermaster. 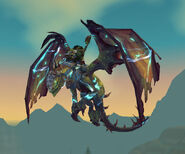 Drake of the West Wind

Players who have gained Exalted status with Netherwing in Outland may get a Netherwing drake mount. 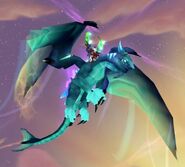 The Sandstone Drake is a mount which can be created by alchemists who have found the rare [Vial of the Sands] recipe through Tol'vir Archaeology. This is a unique mount among the drakes, as it transforms the player into a drake, allowing another player to ride as a passenger.

The Heart of the Aspects, a drake which is "born of the radiant energies of the Dragon Soul artifact" is available for purchase from the Blizzard store.

Heart of the Aspects