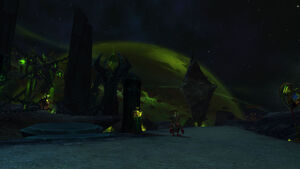 Warlocks in World of Warcraft: Legion. The pitlord

Warlocks initially begin their quest in the Underbelly of Dalaran. When a spell goes awry, the warlock and those involved with the spell are thrown onto Jagganoth's world. Due to assistance from a friendly demon, the hero escapes, but the companions are left behind. With little choice, warlocks are sent to recover their Artifact Weapon, returning to slay Jagganoth and seize control of the demonic armies there. With the Council of the Black Harvest all but decimated, this world provides a place to start anew.

Jagganoth's corpse is strung atop the highest point of the Rift, with his still-beating heart chained nearby.