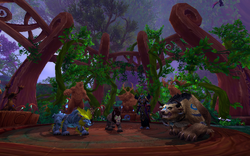 is a relatively remote subzone of Val'sharah. Found across the waters from Black Rook Hold in the far north, it appears surrounded by mountains except for its short shoreline. The area is heavily forested and serves as the Order Hall for druids.[1]

Druids have access to a special pathway that allows them to travel very quickly to other natural places in the world.

Only druids have access to the Dream Grove, accessed after they help Remulos clear the Emerald Dreamway of the taint of the Emerald Nightmare. Once their Order Hall has been established, druids can either teleport to the Dream Grove using Dreamwalk or take the Dreamway. Alternatively, a path along the coast of the Val'sharah coastline runs from the temple of Elune all the way to the Dreamgrove.