For information about playing the class in

Cenarius (son of Elune and Malorne, nephew of An'she)

Druids are spellcasters that harness nature’s raw energy for an incredible breadth of offensive and defensive abilities, as well as to restore life to the wounded. Through communion with nature and the demigod Cenarius, son of the moon goodess Elune and the demigod Malorne, druids are supernaturally endowed with the gift of shapeshifting, allowing them to take the form of all manner of nature’s creature and access powers as distinct as they are diverse.[1]

Before life even began, before even the cosmos took shape, there was Light ... and Void. In the form of a boundless prismatic sea, the Light swelled across all existence. The ocean of Light was dynamic and ever shifting. Yet as it expanded, some of its energies faded and dimmed, leaving behind pockets of cold nothingness. From the absence of Light in these spaces, a new power coalesced and came to be. This power was the Void, a dark and vampiric force driven to devour all energy, to twist creation inward to feed upon itself. The Void quickly grew and spread its influence, moving against the waves of Light. The mounting tension between these two opposing yet inseparable energies eventually ignited a series of catastrophic explosions, rupturing the fabric of creation and birthing a new realm into existence. In that moment, the physical universe was born. The energies released by the clash of Light and Void raged across the nascent cosmos, raw matter merging and spinning into primordial worlds without number.[2]

The most common forms of life to appear were the elemental spirits—primordial beings of fire, water, earth, and air. These creatures were native to nearly every physical world. Occasionally, cloud of fractured Light gathered and gave shape to beings of far greater power, of far greater potential. Among them were the titans. Composed of the primordial matter from which the universe was born, the titans were godlike beings. Their spirits—known as world-souls—formed deep within the fiery core of a small number of worlds. These energies suffused the celestial bodies they have inhabited.[3]

Azeroth and the Old Gods

In an isolated corner of the Great Dark, a miraculous new world was taking shape. One day, it would be known as Azeroth. Eventually a group of Old Gods, the physical manifestations of the Void, slammed into Azeroth's surface, embedding themselves in different locations across the world. These Old Gods towered over the land, mountains of flesh, pockmarked with hundreds of gnashing maws and black, unfeeling eyes. A miasma of despair soon enveloped everything that lay in their writhing shadows.[4]

Eventually, a titan known as Aggramar sensed something extraordinary: tranquil dreams of a lumbering world-soul, billowing across the cosmos. Nestled within the world's core was one of Aggramar's kin-one far more powerful than any yet encountered. The spirit was so mighty that Aggramar sensed its dream even through the din of activity that rattled across the world's surface. Yet as Aggramar drew closer to Azeroth and beheld the world, horror seized him. Void energies shrouded the world's surface like a layer of diseased flesh. From the ruined landscape rose the Old Gods.. Miraculously, the nascent titan's spirit remained uncorrupted, but Aggramar knew it was only a matter of time before it succumbed to the Void.[5]

Aggramar formulated a bold plan of attack: all members of the Pantheon would travel to Azeroth and purge the Black Empire that had claimed it. They would not, however, take action directly. Due to their forms, Aggramar feared the Pantheon would damage, or even kill, the world-soul. Instead, he proposed creating mighty constructs to act as the Pantheon's hands and prosecute their will against the Black Empire. Under the guidance of the great forger Khaz'goroth, the Pantheon crafted an army of enormous servants from the crust of Azeroth itself. The members of the Pantheon imbued a number of their servants with their specific likeness and powers to lead the rest of the titan-forged. These empowered beings were called keepers. Though they would develop their own personalities in time, they would forever after bear the mark and abilities of their makers. One of them is known as Keeper Freya and the titan Eonar gave the construct command over Azeroth's flora and fauna.[6]

Fall of the Black Empire

As one, the keepers turned their riteous gaze on the heart of the Black Empire, the sprawling city built around the Old God Y'Shaarj. By toppling the most powerful bastion on Azeroth, the keepers believed they could crush their enemies in one strike. However, Y'Shaarj was more powerful than the keepers had expected. The Pantheon grew concerned that the Old God would overwhelm their servants. Despite the risk of harming the world, they decided to take direct action. Aman'Thul himself reached down through Azeroth's sky and took hold of Y'Shaarj's body. With a heave of his arm, he tore the Old God from the crust of the world. In that moment, Y'Shaarj's bulk was ripped apart. The immensity of the Old God's death rattle shattered mountaintops and obliterated hundreds of titan-forged where they stood. Y'Shaarj was dead, but its tendrils had bored more deeply through Azeroth than Aman'Thul had ever imagined. In excising the Old God from the world, he had ripped an eternal wound in Azeroth's surface. Volatile arcane energies—the lifeblood of the nascent titan—erupted from the scar and roiled across the world.[7]

Forging of the Well of Eternity

The keeper's most pressing concern was the horrific scar left behind when Aman'Thul had torn Y'Shaarj from the world's crust. A constant stream of volatile arcane energy bled from the colossal rift, lashing out across the world. The keepers knew that, if left unattended, these energies would consume Azeroth over time. The keepers labored day and night, crafting magic wards around the gaping wound to staunch the escaping lifeblood. Eventually, the energies calmed and settled into balance. All that remained of the scar was an immense lake of energy that the keepers would call "the Well of Eternity". Thereafter, the power of this fount would be infused in the ailing world, helping life to take root and bloom across the globe.[8]

Freya and the Wild Gods

As the titan-forged began shaping Azeroth, Keeper Freya set out to populate the world with organic life. To do so, she crafted the Emerald Dream, a vast and ever-shifting dimension of spirits and nature magic. Freya then wandered the world, searching for areas where the Well of Eternity's energies had coalsced. These regions created optimal conditions for the development of new flora and fauna. Frey shaped immense enclaves of nature at these places. The greatest creatures to emerge from these enclaves were the colossal animals known as the Wild Gods. Freya often wandered the physical world with the Wild Gods at her side. Yet there was one place she and the Wild Gods frequented more than any other: a massive forested peak called Mount Hyjal. It was on the slopes of Hyjal that Freya bound the spirits of her beloved Wild Gods to the Emerald Dream. Tied to the ethereal realm, they would come to symbolize the health and vitality of Azeroth.[9]

The First Druid and the War of the Ancients

Eriun Moonglow: "In the name of the storms and the stars, I shall end you!"

Morova of the Sands: The Cenarion Circle will not be content until balance has been restored to the land.

Yanna Dai'shalan: "Nature has many allies. You shall not prevail against all of them."

The elements that carve form into the universe are fluid forces of nature. Some beings seek to bend the power of these natural elements to their will. Druids, however, worship the protecting spirits of nature. Long ago, nature’s equilibrium  was thrown out of balance, leaving the world vulnerable to catastrophic events, including the first invasion of the Burning Legion. By leveraging the sacred powers of the moon, the sun, and the stars, balance druids access arcane and nature magics—made more potent still through shapeshifting, when the spellcaster takes the form of the moonkin—to aid in the fight against imbalance that threatens the natural order of all things.[10]

Thangal: The most powerful druids know their greatest strength lies in versatility.

Feral druids also seek to curb imbalance in nature. They observe the fantastic intricacies of the physical world and the delicate fabric in which all living creatures are given purpose. Whether on land or in the sea, in a lush jungle or an uncultivated desert, death is part of the cycle which sustains life. Nature is an eternal dance between predator and prey. As a shapeshifter, the feral druid endlessly pursues a greater understanding of this truth. They seek a visceral connection to the wild, and in combat take the form of a deadly feline predator. Feral druids become ferocious, agile stalkers—ripping, biting, and bleeding their enemies dry. The forces of chaos are tamed by the druid’s primal fury.[10]

Arktos: "The Great Bear Spirit speaks to me, and it is my duty to share what it teaches."

Like their feral brothers and sisters, guardian druids attune themselves to nature through the animal kingdom. They commune with the wild to understand how life perseveres through adversity. They know that the creatures who survive are often those built to best protect themselves and their kin. In this, the guardian druid finds a deep and harmonious value in the steadfast—all the while recognizing that sturdiness requires an aggressive stance when danger comes near. Taking the form of a great bear, the guardian druid becomes a massive wall of fur, claw, tooth, and rage, aided by the forces of nature, standing between allies and any opposing threats.[10] 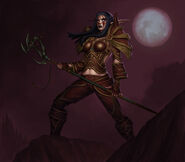 Moonshadow: Life, death, rebirth: all of nature is a cycle.

The many gifts provided by nature must sometimes be reciprocated. Restoration druids seek order in the world by tending directly to its many life forms. Friend to flora and fauna alike, restoration druids celebrate birth and growth. Where there is decay, they bring rejuvenation. Where there is abatement, they summon regrowth. Life not only needs protection—it needs nourishment. To foster this harmony, the restoration druid builds a bond with the things that grow, gaining inspiration from the flower’s bloom, the seed’s sprout, the mushroom’s spores, and the tree’s growth. Like nature, the restoration druid perseveres through patience and persistence, the foundation upon which all life is built and sustained. They use this power to mend wounds and provide persistent remedies that keep their allies from falling.[10]

Did Cenarius Teach Druidism to Repair the Damage caused by Galakrond?