Holy Light, Mystery of the Makers

Southeast of The Barrens in Central Kalimdor

Dustwallow Marsh is a vast and ancient swamp in Central Kalimdor that is home to many old and wonderful beasts. Navigation is often extremely difficult and many adventurers have lost their way in this great morass. Trees obscure the sunlight and raptors, spiders, and crocolisks lie in wait, hunting those brave enough to venture close to their lairs.

A hot, fetid swampland, Dustwallow Marsh is fed by underground springs that keep it eternally wet and muddy. Mosquitoes buzz in the air. Trees dip fronds into the waters. The climate is home to a variety of predators, including crocolisks and murlocs. Black dragons dwell in the southern end of the swamp in such profusion that the area garners the name "Wyrmbog". Dustwallow Marsh abuts the ocean on its east side, and the mixing of the waters makes a wide swath brackish. Off the coast is a rocky island, on which is perched the Alliance stronghold-city of Theramore.[1] (WoWRPG 18)

Near the low hills that from the eastern edge of the Marsh separating it from the Barrens, the Stonemaul ogre tribe have opened their Brackenwall Village to the races of the Horde. Brackenwall serves as an essential foothold for the Horde in the marshlands.

In Patch 2.3.0 Blizzard re-evaluated the Dustwallow Marsh zone to help the leveling process for levels 20-60. A new goblin town called Mudsprocket and new quests for both Theramore and Brackenwall Village were added.[2]

Dustwallow Marsh was once a high plain filled with herd animals that thrived on the tall grasses. Then came the great Sundering, and the plain was smashed down into a depressed valley. The water table bled up and saturated the landscape, creating the great marsh that exists today.[3] (WRPG 198)

Dustwallow Marsh had long been home only to wild beasts, but all this changed in the Third War, when Jaina Proudmoore led her people here to settle down after the battle with Archimonde at Mount Hyjal. Founding the city of Theramore, Jaina's humans rapidly extended into the swamp, building fortified guard towers at important points along the road to the Barrens.

The ogres of Stonemaul, having settled in the region after Thrall brought a regiment of them to Kalimdor with his fleet, were called to war upon the humans by their newly established leader Rexxar, in response to an attack by Admiral Proudmoore and his Kul Tiras Marines. Dustwallow Marsh saw a great skirmish between the opposing forces, leading to the death of the zealous, albeit misguided hero of the Alliance.

Perhaps it is because of extreme terrain conditions that neither the Horde nor the Alliance has succeeded in establishing an extensive presence in the area. Located on the rocky tip of the peninsula on the eastern shore, the citadel of Theramore Isle is the home of Jaina Proudmoore and a great bastion of the Alliance. The gleaming walls of this bastion, however, often serve to contain the Alliance, and its presence does not extend far beyond them, despite a number of scattered checkpoints and towers that dot the road leading to The Barrens. Theramore Isle's military has recently been dwindling, partly due to the ever-increasing number of desertions, although why so many people have chosen to forsake their place with the Theramore garrison remains a mystery.

Despite bordering on Horde-controlled territory, tauren and orc presence in Dustwallow Marsh is equally marginal and is largely confined to Brackenwall Village to the northwest. Founded by the Stonemaul ogres and ruled by the iron fist of their leader, Mok'Morokk, Brackenwall Village is the only vestige of the Horde in the area. As the Stonemaul ogres do not generally seem to take much interest in the outside world, much of the area between the bastion of Theramore Isle and the Horde settlement remains wild and untamed, with even the road leading to the Barrens rapidly falling into disrepair.

Though neither faction controls a significant portion of Dustwallow Marsh, covert skirmishes between the Alliance and Horde have become common, in spite of the official truce that is maintained in the region. There have been reports of Brackenwall Village taking military action against the covert Theramore infiltrators, who have been spotted to the east of the village. Other sources indicate that a number of Horde spies have been murdered or simply disappeared while attempting to infiltrate Theramore. Clandestine activities on both sides continue to this day and are more likely to escalate into a full-fledged covert conflict than cease completely.

In the south of the marsh, the black dragonflight has established a presence. Consequently, these regions of the swamp have come to be known as the Dragonmurk and the Wyrmbog. Until recently, the Stonemaul ogres lived in Stonemaul Village in this region in relative peace. The Mok'Nathal Rexxar assumed leadership of their tribe some time ago and forged an alliance between the Stonemaul and the Horde. The Black Dragonspawn attacked the village in a terrible rout and the surviving Stonemaul ogres were forced to retreat to Brackenwall. They have sworn revenge on the usurpers. It is said that this wilderness is also home to Onyxia, a great dragon and the daughter of Deathwing, although few adventurers have ever ventured into her lair and lived to tell the tale.

In Patch 2.3, the whole zone of Dustwallow Marsh was improved to make it more quest-friendly and a less lonely place to be in.

The goblin town of Mudsprocket

The flight master stands outside the town

Repairer of the town

Dustwallow is a temperate to hot watery swamp. Dustwallow Marsh is located southeast of the Barrens and north of Thousand Needles. The swamp curls to the east, forming a bay around the island of Theramore. Dustwallow is a flood plain fed by underground springs and surrounded by the dry savannas of the Barrens. The marsh is eternally wet, muddy, and hot, unfit for proper settlements and a haven for creatures that crave the wetness and humidity. Narrow banks of slippery mud separate endless stagnant pools and algae-choked channels, making Dustwallow a traveler’s nightmare. The roads that cross the fen are muddy and treacherous, and the surrounding swamp is even more dangerous to traverse. Those who mistake the thick, wandering bogs of the marsh for solid land may fall through, only to have the floating plants close above and trap them in the brackish water. Dustwallow teems with predators that lurk just beneath the surface of every pool and skulk behind every bush. In the east, the turbid water of the marsh mixes with salt water from the sea. The rocky form of Theramore Isle lies just beyond in the bay.

The marsh is the best way to approach Theramore by land, as jagged rocks outside the bay make sailing directly from the goblin city of Ratchet difficult. The marsh’s southern expanse grows rockier as it approaches Thousand Needles. The pools are larger and far deeper, with half-submerged rocky outcrops. Many of these rock clusters have openings that lead into cave systems. The caves are often surprisingly dry and serve as lairs for a variety of beasts. Some conjecture exists whether the caves are interconnected with the underground river that keeps the swamp submerged or if they might even extend out to the sea.

The hundreds of shallow pools that comprise the marsh hold creatures ranging from massive plant eating kodo beasts to ambushing packs of raptors to territorial water-loving murlocs. The saltwater swamp of east Dustwallow is a popular breeding area for the murloc packs. Indeed, the waters teem with aquatic creatures of all sorts. Humans and murlocs drag nets down the channels to harvest gigantic mudfish, but also pull in everything from alligators to eels. Poisonous snakes hang from the trees, and some of the larger specimens are known to drag the unwary up into the branches. Of course, these dangers are nothing compared to those of Dustwallow’s southern region. The rocky outcroppings common to this area are ideal lairs for black dragons, and those creatures are so common in the area that it has earned the name "Wyrmbog".[3] (WRPG 198)

It should also be noted that the zombies and spirits that haunt the areas of Witch Hill and Swamplight Manor do not appear linked to the Scourge or the Lich King but may be the sole work of the demon Zelfrax who is summoned and defeated at the end of the quest chain Cleansing Witch Hill.

The raid dungeon Onyxia's Lair and the micro dungeon Alcaz Island can be found in this area. No other dungeons or battlegrounds are located here.

Dustwallow Marsh is home to several characters of note. At Brackenwall Village, Overlord Mok'Morokk seeks aid in the battle against the black dragonflight. In her cottage in the Quagmire, Tabetha recruits the arcanely inclined in an attempt to cleanse the taint that has affected a mystical orb. In his lair, Emberstrife unwittingly helps disguised agents of the Horde in entering his queen's lair, and at Theramore Isle, Lady Jaina Proudmoore sends bold adventurers into the swamp in search of a missing diplomat. Nat Pagle also resides at Nat's Landing, where adventurers from around the world come to hear of his fishing adventures and from where he offers guidance to those who have significantly advanced the patient art.

Dustwallow Marsh will be a 35-40 zone in Cataclysm.[4] With the escalating warfare in the Southern Barrens, a highway has been constructed through the marsh from Theramore to the Barrens.

The road to the Barrens, Theramore side 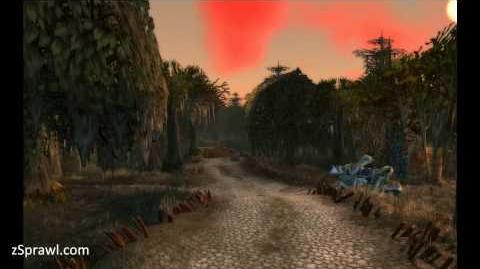 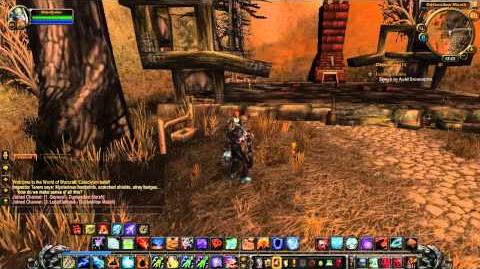