The dwarves of Ironforge are an ancient race of robust humanoids who live beneath the snow-capped mountains of Khaz Modan. The dwarves have always been fast allies to the humans and they revel in the prospects of battle and storytelling alike.

For many long centuries, three dwarven clans—the Bronzebeards, the Wildhammers, and the Dark Irons—lived united in Ironforge under the wise rule of High King Modimus Anvilmar. When Modimus passed away from old age, tensions boiled over among the clans and war erupted for control of the city. Thus began the War of the Three Hammers, a savage conflict that raged for many years, during which time the Bronzebeard clan won sole ownership of Ironforge and expelled its rivals. The war severed relations among the clans, and they went on to forge new destinies apart from one another.

After Magni Bronzebeard was turned to crystal during the Cataclysm, the three clans came together once again, albeit with a great deal of hesitation. They decided to rule jointly, and after Magni awoke from his transformation, there remained concern he and his clan would once again push their brethren out. Magni, however, accepted the new government and set out on his own, having become a herald and voice of the world of Azeroth itself.

The stoic dwarves of Ironforge spent countless generations mining treasures from deep within the earth. Secure in their impregnable stronghold of Ironforge Mountain, the dwarves rarely ventured beyond the wintry peaks of Dun Morogh. Even so, when the orcs invaded Azeroth and set out to conquer the human, elven, and dwarven lands, the dwarves offered to join the Grand Alliance. The resilient and ingenious dwarves proved to be the backbone of the Alliance forces and helped usher in victory after victory.

The dwarves were stout allies of the humans during the Second War, joining the Alliance of Lordaeron after their homeland of Khaz Modan was invaded. Holed deep in their mountainside city-fortress of Ironforge, the dwarves have managed to weather both the Horde invasion and the plague. Still, they are long-lived, slow and careful folk, and children are a rare blessing to them.

Still, their tendency to explore is impressive. If about two thirds of the surviving humans now live in the capital city of Stormwind, less than a third of the dwarves are in Ironforge. In fact, there are more dwarves in the dwarven section of Stormwind than Ironforge itself. For quite some time, Ironforge was home to the gnomish population as well after their homeland of Gnomeregan was invaded until their daring, yet successful, attempt to reclaim it.

Recently the dwarves unearthed a series of ruins that held the key to the secrets of their lost heritage. Driven to discover the truth about his people’s fabled origins, King Magni Bronzebeard ordered the dwarves to shift their industry from mining and engineering to that of archaeology. Magni helped to create the famed Explorers' Guild of Ironforge, a group utterly devoted to plumbing the secrets of the ancient world and delving out the truth of the dwarves’ fabled existence.[1] (WoWMan 170)

When freak natural disasters began rocking much of Azeroth just prior to the Cataclysm, the dwarven lands were not spared from the calamitous upheavals. A series of violent quakes tore through areas surrounding Ironforge, reducing settlements to rubble and taking the lives of many innocent dwarves in the process. To glean answers as to the troubling state of the world, King Magni selflessly underwent a mystic ritual to commune with the earth. The archaic ceremony, however, had an unexpected effect: Magni was transformed into diamond and became fused to the depths of Ironforge itself.

In the power vacuum that followed, his estranged daughter, Moira, who had married into the much despised Dark Iron clan, briefly claimed Ironforge’s throne and effectively locked down the city. If not for the intervention of King Varian Wrynn of Stormwind and his son, Prince Anduin, her brash actions might have sparked another civil war. With Varian’s guidance, control of Ironforge has since been divided equally among the Bronzebeard, Wildhammer, and Dark Iron clans through the Council of Three Hammers. Yet as bitterness and prejudice fester among the clans, the council’s ability to govern as one remains uncertain.[2]

Due to recent discoveries that uncovered fragments of their ancient origins (for example, the Discs of Norgannon in Uldaman), the dwarves have undergone a remarkable transformation. The discovery convinced the dwarves that the mighty titans created them from stone when the world was young. They feel that their destiny is now to search the world for more signs of proof of their enchanted heritage and to rediscover the Titans' hidden legacies.

To this end, the dwarves have sent out archaeological teams to all ends of the world in the hopes of discovering new insights into their shrouded past. These journeys have led to dwarven excavation sites all over the known world, some of which serve as outposts.

The dwarves start in Coldridge Valley

, an area of Dun Morogh closed off by mountains.

Dwarves can tap into their Earthen heritage to undergo a temporary partial sclerosis, known to the layman as Stoneform. Not only does this make the dwarf more resistant to injury, it also seals open wounds and eliminates most poisons and infections. The lives of many dwarves have been saved by stoneform.

Dwarves are naturally adapted to cold climates, as evidenced by their stocky build and thick hair. Experienced wizards have observed that dwarves have a slight innate Frost Resistance.

Since the founding of the Explorers' League, interest in adventure has been strong in Ironforge. In order to discover more of the world's history, many dwarves leave their homes, ready to explore Azeroth for artifacts of value.

Warrior: Dwarven warriors are a force to be reckoned with. They are incredibly sturdy, both physically and mentally, and many dwarves have worked on excavation or construction sites at least once in their lives. The long days of digging and wielding heavy tools have resulted in this extraordinary resilience.

Rogue: While not as small in stature as their gnomish cousins, dwarves have always been excellent scouts and thieves due to their size. Also, their hardiness comes in handy when a scouting mission takes place in harsh environments.

Hunter: Dwarves have always had a knack for the rifle, especially the Bronzebeards. Knowledge of survival has been crucial in the rigid plains and mountains of Khaz Modan for any clan. Additionally, the Wildhammer dwarves prefer using the bow to hunt game for their communities.

Mage: Until recently, only the Dark Iron clan practiced magic, with the exception of the Holy Light, upon which the Bronzebeards also practice. However, when Moira Thaurissan was "invited" to help rule over the dwarves as a whole, she introduced her clan to Ironforge, who then introduced the magical arts and spread it to the Bronzebeard.

Warlock: When the majority of the Dark Iron dwarves aligned themselves with Ironforge, they spread the secrets of different schools of magic aside from the Holy Light or shamanism, things the Bronzebeard and Wildhammer clans historically avoided. Though frowned upon by their clans, some Bronzebeards and Wildhammers have forsaken their more limited magic and embraced the powerful, chaotic forces of Shadow.

Priest: The Bronzebeard clan has long practiced the arts of the Holy light, taught to them years ago by their human allies. However, when the three dwarven clans united and mixed under the banner of Ironforge, some Wildhammers set down their nomadic and shamanistic ways and began to worship the Holy Light. The Dark Irons had been practicing their own version of a priest, simply known as clerics or medics.

Paladin: Only the Bronzebeards officially walk the path of a paladin. Years ago, when the dwarves befriended the humans, the humans taught them the ways of the Holy Light and introduced them to the orders of knights. A notable one is the Knights of the Silver Hand, where many humans and dwarves work together to bring justice to the scourged lands of the undead.

Shaman: Originally, only the Wildhammer clan practiced shamanism. They lived alongside and worshipped the spirits of the sky and mountains, relatively uninfluenced for decades. Upon joining the trio of the dwarven clans under the banner of Ironforge, many Wildhammers attempted to spread their ways to the other clans. Today, while the majority of dwarven shaman remain Wildhammers, Bronzebeards and Dark Irons can now be found among them.

Death Knight: Like so many other races of the Alliance and Horde, noble dwarves of all clans have fallen before the might of the Scourge, particularly in Northrend, only to be twisted and raised into undeath as a death knight under the control of the Lich King. Many, though, escaped his mental grasp with the rest of Ebon Blade.

This is a list of voice emote jokes for dwarves of both genders. Because of the way player characters work, these lines are accessed via the /silly slash command.

Dwarves have what can be considered traditional Scottish and Irish accents. They share a common faith in The Light along with a strong belief and curiosity about the Titans. Also, they are a proud people; the beard of a dwarven man is a matter of great pride. 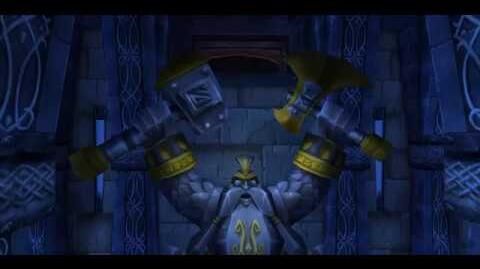 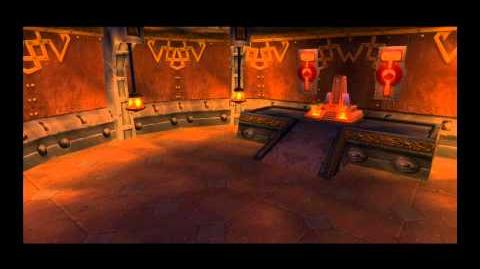 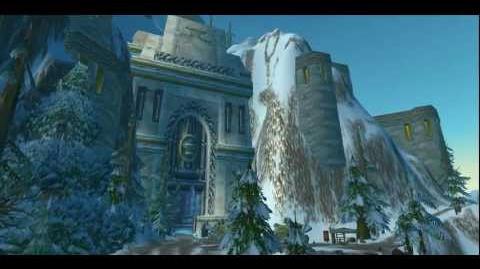