For other uses, see Azeroth.

An old map that was on the Blizzard web site and the Warcraft RPG shows that the Eastern Kingdoms are divided into three continents:

Quel'Thalas seems to make up a fourth continent in some maps. Most of the time, it appears that the Eastern Kingdoms are divided into only three continents, as Quel'Thalas is shown as part of northern Lordaeron.

Eastern Kingdoms is actually considered to be three subcontinents: Lordaeron in the north, Khaz Modan in the middle, and Azeroth (the continent) in the south. It has a variety of climates like Kalimdor, but has more zones that show damage from humanoid intervention. The Alliance dominates the central and southern parts of the continent (with the exception of Stranglethorn Vale). However, the north is the stronghold of the Forsaken and regions scarred by the Scourge.

Unlike Kalimdor, the Eastern Kingdoms have very few desert areas (except maybe the Badlands), but several areas are wastelands (the Blasted Lands, Burning Steppes, Deadwind Pass, and Searing Gorge). It has a few more specifically swampy areas like the Swamp of Sorrows and the Wetlands, but temperate forests and hills proliferate. For some reason the mountainous areas surrounding Ironforge appear to be perpetually snowy, while most of the other regions are temperate or warmer.

Lordaeron in Lands of Conflict.

Lordaeron in the World of Warcraft manual.

Khaz Modan in Lands of Conflict.

Khaz Modan in the World of Warcraft manual.

Azeroth in Lands of Conflict.

Azeroth in the World of Warcraft manual.

The Eastern Kingdoms graphic during the Burning Crusade expansion.

The Eastern Kingdoms graphic during World of Warcraft: Wrath of the Lich King

As it appears on the minimap in Cataclysm.

This video will provide an "annotation adventure" which will lead you to other videos containing overviews of updated zones in World of Warcraft: Cataclysm (courtesy of Jesse Cox). 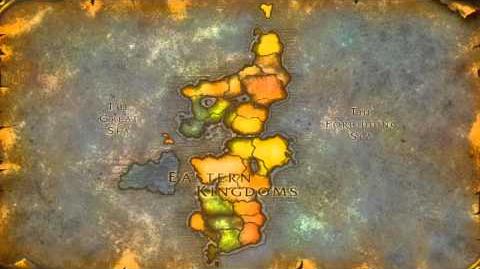