Northeastern Lordaeron
The Eastern Plaguelands (formerly known as the Eastweald)[1] is the more heavily devastated half of the Plaguelands, the remnants of the Kingdom of Lordaeron. They are located east of the Western Plaguelands, north of the Hinterlands, and south of the Ghostlands.

The Scourge’s rule here is supreme. Their northern capital of Stratholme is here, under the command of the lich, Kel’Thuzad. The ground is brown, ugly, and sick, the trees corrupted into giant mushrooms and the air polluted with orange mist. Undead, necromancers, and Damned cultists prowl the land. The Scarlet Crusade boasts a large army and battles fervently and vainly against the Scourge; outsiders are also unwelcome. Amani forest trolls strike from the north, attempting to reclaim their ancestral empire.[2]

The area is roamed by mutant creatures and soldiers of the Scourge, while members of the Scarlet Crusade fight a constant battle to drive the Scourge out of Stratholme from their Chapel and key base at Tyr's Hand. Only a small camp maintained by the Argent Dawn remains friendly to all, welcoming adventurers that would lend a strong arm or spell. Located at Light's Hope Chapel, this staging area serves as a last bastion of Light in a land blanketed in darkness.

With Patch 1.12, objective-based world PvP was added to the zone. Members of the Horde and the Alliance battle in A Game of Towers for four strategic ruined outposts spread throughout the land. Controlling these towers gives area-wide benefits and certain towers provide other, unique advantages. This contest was removed with the

Like the Western Plaguelands, the Eastern Plaguelands were once beautiful and brimming with farms and small villages. The regional government was centered around the city of Stratholme, the largest city in Lordaeron. Also nearby were the towns of Darrowshire, Corin's Crossing, and Tyr's Hand, and to the east of Stratholme was the pass leading into the southern boundaries of Quel'Thalas. At this time, it was known as the Darrowmere Forest after the lake with the same name to the south.[citation needed]

In the opening hours of the Third War, the investigations into the origins of the Scourge led Prince Arthas and Jaina Proudmoore through the Tirisfal Glades and what is now the Western Plaguelands (more specifically, the towns of Andorhal and Hearthglen), where they confronted the necromancer Kel'Thuzad and his Cult of the Damned. Kel'Thuzad told Arthas to seek out the leader of the Scourge in Lordaeron, the Dreadlord Mal'Ganis, at Stratholme. While en route via Hearthglen, Arthas and Jaina were joined by Lord Uther, master of the Silver Hand. When they arrived at Stratholme, Arthas realized that the villagers had been infected with the Plague of Undeath. When Uther refused to obey Arthas' command to purge the city, Arthas relieved Uther of command and disbanded the Silver Hand, then slaughtered the townsfolk himself. After hunting down Mal'ganis in Northrend, Arthas returned as one of the Lich King's death knights and toppled the Kingdom of Lordaeron by murdering his own father, King Terenas. After the fall of Lordaeron's capital, the plague spread throughout the northern regions of Lordaeron, turning them into the blighted lands they are today.

The resistance against the Scourge was particularly bloody at Darrowshire, where the ghoul Horgus the Ravager and the death knight Marduk Blackpool (alias Marduk the Black) led an army of Scourge against the town. Only surviving paladins under Davil Crokford and the Darrowshire militia under Captain Joseph Redpath were able to stand in their way. Though they put up a valiant fight, the defenders of Darrowshire were not enough to stave off the endless legions of Scourge. Davil managed to defeat Horgus in combat, but he succumbed to the horrific wounds the ghoul had inflicted. Captain Redpath fell to Marduk's necromancy, his soul taken from his body and corrupted into the service of the Scourge, where he proceeded to turn on his fellows and tear Darrowshire apart, killing everyone who hid in their homes.

After the fall of Lordaeron, the Scarlet Crusade attempted to retake the shattered kingdom from both the Scourge and the undead renegades known as the Forsaken. In the Eastern Plaguelands, they took control of both the town of Tyr's Hand and the western districts of Stratholme, where they battle the forces of Baron Rivendare to gain control of the destroyed city. Eventually, the master of the Scourge in Lordaeron made his return to the blighted lands. From his citadel of Naxxramas, floating over the Plaguewood near Stratholme, he prepared to continue the work he began in the name of his master, the Lich King. Recently, Naxxramas floated away from the Plaguelands and reappeared over Dragonblight in Northrend, though it was replaced by Acherus: The Ebon Hold over the far eastern portion of the zone. From there, Arthas sent his death knights to exterminate both the Scarlet Crusade and the Argent Dawn and leave his grip over the Plaguelands unchallenged. But, there is that old saying about the best-laid plans of mice and men (and Lich Kings)...

The Eastern Plaguelands contain a normal instanced dungeon (Stratholme), and formerly contained the raid dungeon Naxxramas. The micro dungeon Tyr's Hand can also be found here. Light's Hope Chapel serves as a travel hub for both the Horde and the Alliance. There are no battlegrounds in this zone, though it is a world PvP area.

Light's Hope Chapel is the primary travel hub to and from the Eastern Plaguelands, and connects directly to the Alliance city of Ironforge and the Horde city of Undercity.

Cataclysm, the Plaguewood Tower flight path could only be used if a player's faction controlled the tower (as it was part of the A Game of Towers World PvP event). Plaguewood Tower's flight path was also the only path in the game to use the spectral gryphon for all character classes (versus Death Knights use of the spectral gryphon when flying out of the Ebon Hold), and it was used regardless of Faction.

The Eastern Plaguelands have been expanded somewhat to include a small area for death knights, including their home base of Acherus: The Ebon Hold, a massive Scourge necropolis floating above the hills behind Light's Hope Chapel. It is here that the death knight trainers, as well as their leader Highlord Darion Mograine, can be found.

Death knights start out in Scourge service in a special instanced area east of Tyr's Hand known as the Scarlet Enclave. As they progress in their training, death knights are tasked with laying waste to the towns of New Avalon and Havenshire, which lay below the fortress. The towns are left in ruins as the death knights sweep through them with the Scarlet Crusade inhabiting them all but destroyed. After sacking both towns, death knight players participate in a final, epic Battle for Light's Hope Chapel. After the battle is concluded, the death knight is deposited into the "main" (non-instanced) Eastern Plaguelands, where they begin their service to the faction their race belongs to. In the "main" Eastern Plaguelands, the Scarlet Lands - consisting of Tyr's Hand, New Avalon and Havenshire - are left completely in ruins, their once-green pastures devoured by the blight that permeates the rest of the region.

The ruins of the towns of New Avalon and Havenshire, collectively referred to as the Ruins of the Scarlet Enclave, are reachable from two directions. First, players may travel through Tyr's Hand, and take the final fork in the road to the north. Alternately, players may travel through Browman Mill into the Noxious Glade and follow the south wall to a cave which leads to Death's Breach, at the northern end of the Ruins.

The Eastern Plaguelands will be retuned as a level 40-45 zone.[3] The Plague is still present in the zone, although it slowly recovers from its influence. Light's Hope Chapel has been fortified, the towers claimed by the Argent Crusade and the scars have been filled with water.

The Eastern Plaguelands are home to several characters of note. At Light's Hope Chapel, Lord Maxwell Tyrosus leads the Argent Dawn in the fight against the Scourge. At the Marris Stead, Nathanos Blightcaller sends bold heroes of the Horde against the Scarlet Crusade. At his home by the Thondroril River, Tirion Fordring seeks to eradicate the dark horrors that the Plaguelands offer. And in the halls of Acherus, high above Light's Hope Chapel, Highlord Darion Mograine commands the Knights of the Ebon Blade. 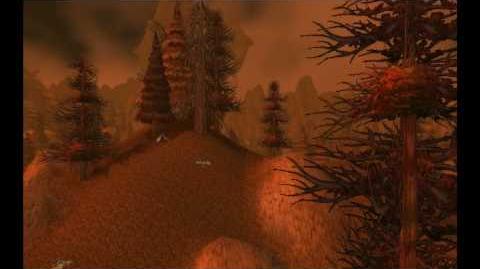