The End-game (also known as Elder game) refers to the part of the game where level advancement is no longer the goal and other activities take center stage. In the World of Warcraft, these include, but are not limited to:

In most MMORPGs, this occurs when the players hit the maximum level or skill and look for new ways to keep themselves busy now that they're off the levelling treadmill. In EverQuest and Dark Age of Camelot for instance, the part of the end-game consists of hours of raiding extremely challenging locations in an attempt to earn prestige, alternate advancement points, and "phat lewt". Meridian 59, Ultima Online, Dark Age of Camelot, Shadowbane, and World of Warcraft all attempt to provide an end-game consisting of PvP activities: you have nothing to lose, no real risk, and can gain prestige by killing other challenging players.

Historically, a game company without a solid plan for an end-game risks alienating its player base. The end-game should grow and change over time, to keep things interesting for the players who still enjoy participating after "winning the game."

The term "End-game" is not entirely accurate considering that World of Warcraft is a multiplayer world and does not "end" in the same sense as a traditional video game. It merely refers to the most challenging content. 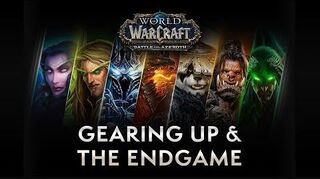 Edit to the right of the section title.
Retrieved from "https://wowwiki-archive.fandom.com/wiki/End-game?oldid=2851254"
Community content is available under CC-BY-SA unless otherwise noted.