Azeroth trembled before the might of the Burning Legion. Human and Orc alike fled before the massive infernals summoned from the chaos to wreak havoc upon the hapless populace. Countless adventurers, driven to protect their homeland, fell before Dreadlord and Doomguard, Giant and Dragonkin. Though the defenders achieved small victories in the defense of their cities, there was no end to the monstrous army that bore down upon them. The damage was devastating. Strangest of all, witnesses swore they could smell roast chicken...

World of Warcraft's Open Beta ended with a bang (or cluck)!

The Burning Legion launched an attack on the major cities and locations of Azeroth. Fearless adventurers banded together in a vain attempt to repel the invasion. There were also unconfirmed reports of characters and monsters suddenly and inexplicably turning into chickens!

The World of Warcraft open beta test has now come to a close. During the beta test, over 500,000 players adventured through the lands of Azeroth and helped World of Warcraft on its way to becoming one of the largest massively multiplayer online games in the U.S.! The beta test community has been a tremendous source of information and feedback for the development teams, and we wish to thank our beta testers for participating in the beta test process. When the final version of World of Warcraft hits stores on November 23rd, you'll see the culmination of your hard work. The entire World of Warcraft team is now focusing on a smooth launch, and we look forward to hearing your thoughts about the game. Thank you again for your continued support with this project; we look forward to seeing you on in Azeroth.

Once again we'd like to thank all of the testers who participated in World of Warcraft's beta test. Your contributions helped create a fun and exciting game that will entertain players for years to come!

You can watch end of beta footage in "Final Hours": 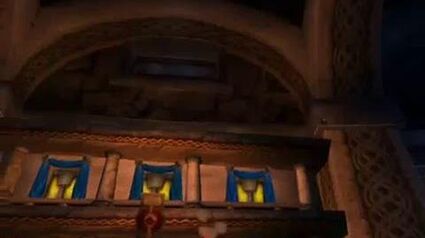 More screenshots can be found at the following places:

Retrieved from "https://wowwiki-archive.fandom.com/wiki/End_of_beta_event?oldid=2845581"
Community content is available under CC-BY-SA unless otherwise noted.