This article is about the character biography of Falric. For information on how to defeat Falric in the Frozen Halls, see Falric (tactics).
Not to be confused with Falric (Cycle of Hatred).

Captain Falric, also known as The Captain, was a royal guard who served in both the Second War and the Third War. He distinguished himself as the right hand man of Prince Arthas Menethil during the Third War.[1]

Having grown up around the province of Brill, Falric's father originally wanted him to be a farmer. His fate was to be different, however, and he enlisted in Capital City's royal guard instead. Arthas quickly befriended him, bringing him a warm drink or two when the weather was foul and Falric was on duty. Such acts of generosity on Arthas's part quickly earned Falric's genuine respect, forging a bond of companionship that was to last for decades to come.[1]

During the course of the Second War, Falric was likely involved protecting the city against the onslaught of the Horde. The timely betrayal of Gul'dan saved the city from imminent destruction, as the Horde had to recall its forces to exact revenge.

He assisted Arthas all the way through his campaign, from the investigation at Brill all the way to the icy roof of the world, Northrend itself. There, Falric managed Arthas's base camps and held the line against the forces of Mal'Ganis. He did this with the assistance of two other lieutenants under Arthas, Luc Valonforth and Marwyn.[1]

When Arthas went in search of the ancient runeblade Frostmourne alongside Muradin Bronzebeard, Falric was left in charge of their encampment, repelling the siege by Mal'Ganis. Finally, Arthas returned with Frostmourne. When asked where Muradin was, Arthas told Falric that he was dead.[1]

When the final battle came, Falric fought alongside Prince Arthas against the last bastion of Mal'Ganis, claiming victory.

This was, however, not to be the victory that Falric had imagined. Arthas vanished into the frozen wastes with Frostmourne. Eventually, he emerged a changed man. Arthas slaughtered an entire regiment of soldiers and raised them into undeath.[2] Falric was to become one of the first death knights of the Scourge alongside Marwyn.[1]

Ultimately, Falric and Marwyn accompanied Arthas back to Lordaeron. They stood at Arthas's side as he walked into the imperial chamber and murdered his father. It was Falric and Marwyn who had the task of slaying the citizens of the city, raising them into undeath using their newly gained powers.[1]

Falric, alongside Marwyn, made his first appearance in World of Warcraft as a boss of the Halls of Reflection, third wing of the Frozen Halls.

In Arthas: Rise of the Lich King, a separate and unnamed captain delivered his lines to an Alliance Emissary. This was because Christie Golden had originally not known about Luc Valonforth in Wrath of the Lich King. Timolas, a galley winner, noticed that there might be an inconsistency by having people believe that Falric and Valonforth might be confused, and pointed out the issue to Medievaldragon of Blizzplanet. Medievaldragon contacted Christie Golden and informed her about Luc Valonforth. She explained that since she finished writing the book before the release of Wrath of the Lich King, she had not known about the flashback quest involving Captain Luc Valonforth. Medievaldragon then contacted the editors and informed them of the possible inconsistency. The editors agreed to include Luc Valonforth in the book to ensure the clear difference between his character and that of Falric. Thus, it's now confirmed that The Captain from Warcraft III was divided into two separate characters, though Falric remains the principal protagonist amongst the two, retaining the most lines and appearances and being the only one playable in-game.

Luc Valonforth was the captain who spoke to the emissary, which is why he apppears in a flashback scene, while Falric was the captain unit that was usable during most of the campaign. Luc, however, may be still alive. It is possible that Luc was the one who led the survivors to safety to found Valgarde, which may be named after him. 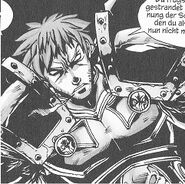 Captain Falric from the manga World of Warcraft: Death Knight 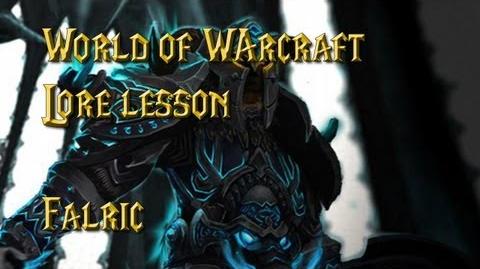