in Stormwind City. He takes players on a plane trip to the Twilight Highlands, crash landing his plane at Highbank

, where he also is a quest giver.

Fargo appears to have little regard for player safety, as the following dialogue he has with "Doc" Schweitzer at Highbank illustrates:

"Doc" Schweitzer says: Flintlocke, if we have a big giant cannon, why don't we just shoot... a cannonball?
Fargo Flintlocke says: Bah, predictable! They'll see it comin'!
Fargo Flintlocke says: But once ol' <name> here blasts through their bulkhead in a hail of splintered wood, blood, and phlegm then starts crawlin' across the deck with both legs broken, oh aye, they'll not see THAT comin' by a sweet mile, no sir!

This NPC is a reference to the main character in Flintlocke's Guide to Azeroth.

Fargo at Highbank, ready to fire players out of his cannon. 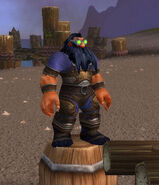 Fargo along the Twilight Shore.
Add a image to this gallery