For the critter, see Cat (critter). 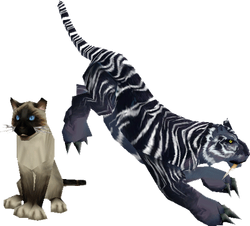 Felines are carnivorous predators that usually hunt by sneaking up on their prey to pounce upon it. Much like in real life, they vary in size from a few pounds to several hundred pounds, and most wild felines can kill prey considerably larger than themselves. Only a few species of felines are strong swimmers.

A type of feline called a saber is also the night elf racial mount.

Though hunters can respec their pet cats into Cunning or Tenacity, they are inherently Ferocity. In addition to the abilities that come standard with all pets ([Growl] and [Avoidance]) and those given to their natural or retrained specialization, all cats are given the following:

Their appealing looks, commonness throughout the game, and variety make them a popular choice. Their Prowl ability works well with a night elf hunter's [Shadowmeld].

These cats aren't necessarily all striped; they share a lower shoulder profile than the saber model and generally smaller teeth.

Saber models are epitomized by larger canines and a higher shoulder profile, giving them a hunched look.