Festergut is a boss in the Plagueworks wing of the Icecrown Citadel raid. It's mainly a DPS race gear check, with only limited tactics involved. He has sometimes been called "Patchwerk 3.3".

This boss is available since January 5, 2010 on US servers and January 6 on EU servers.

Putrid Hate- Festergut releases an AoE nova attack that deals massive magic and stamina damage in a 200 radius. This also tony debuffs players in his radius at a 25% speed decrease.

Festergut has an enrage timer of 5 minutes, which is rather short. In 25 player, this means the raid has to do 135,000 DPS overall, in 10 player it's 32,000. Depending on raid size and numbers of healers and tanks, the following table yields the average DPS needed per damage dealer (assuming 2 tanks with 2k DPS in 10 player and 2 tanks with 3k in 25 player):

Tank the boss right where he starts. The raid is divided into a ranged group which sets up distributed, at least 7 yards away from everyone else, and a melee group, which stands close in, everyone on top of each other, slightly behind the boss. Members of the close-in group hardly need to move at all, and can concentrate on maximum DPS. Melee dps can dps from the side of the boss, but must collapse onto the tanks for the spores. The ranged group has to move regularly, and its members may also get Vile Gas, which incapacitates them for 6 seconds.

So the first priority when organizing the groups is to get the minimum number in ranged. If possible, healers should be part of the melee group (this encounter is pretty healing intensive). If many ranged are available, it's even possible to put ranged damage dealers in the melee group, increasing their output substantially. On the other hand, it may be advantageous to put a few more than the required minimum at range, to reduce the probability of double spores in the melee group, and to create a safety margin if a ranged dies.

The ranged group members need to keep at least 7 yards away from everyone else. The simplest method is to put the required number of ranged players in a wide circle around the room. It's possible to move around the outer circle without pulling the boss prior to the fight. A more efficient way is to organize ranged in pairs, where one player stands halfway towards the melee group and the other stands outside.

Roughly two minutes into the encounter, Festergut casts Pungent Blight, which causes about 50,000 damage to every player in the raid. Players take 25% less damage per stack of Inoculation they gain. Inoculation is gained by standing within 5 yards of a Spore when it explodes. Festergut casts three sets of Spores prior to Pungent Blight; thus players can reduce Pungent Blight damage to 25% (12.5k). It's not possible to gain more than one stack of Inoculation at the same time, that is standing within 5 yards of more than one spore results in higher damage taken, but not extra Inoculation stacks.

The first Pungent Blight clears all stacks of Innoculate. Festergut continues to cast Spore sets, and may cast a second Pungent Blight about 30 seconds prior to the enrage. If overall damage output is high enough to kill him early, it's safe to pop DPS cooldowns after the 3rd spore and ignore the spores for the remainder of the fight. However, with marginal DPS, it's a good idea to continue stacking Innoculation, and pop cooldowns after the 6th spore.

In 10 player, Festergut casts 2 Spores, in 25 player it's three. After Spores are cast, all players have 10 seconds to move within 5 yards of a raid member with a spore. At the same time, raid members with spores should pay attention that two spores should not stand next to each other.

Given the above raid layout (minimum number of ranged and maximum number of melee), the melee group usually doesn't have to worry - it's highly probable that one Spore spawns on a melee member, so they usually don't have to move at all. For the ranged group, there are two movement tactics possible:

Ranged members who get Spore simply stand still. All other ranged have to find the Spore closest to them, move there, wait until it bursts, and then return to their places. Advantages of this method are:

Two/one (in 25/10 player) ranged get a raid mark. These never move. One raid member with a Spore must move to each of the marked players, and all other ranged can move to the mark closest to them. Advantages:

Once the tank has the bosses attention, the 3 stacked players move forward 10 yards and start dpsing. We now have a line of 3 in front of a line of 5. When the spores come out, all ranged collapses on their one collapse point, the middle player in the back row of 5. After the spores pop, ranged returns to their positions. Ranged watches their spacing throughout the fight, which should be 10 yards, as Gaseous Blight victims wander around a bit. The forward group of 3 must not be too close to the melee because if they are Gaseous Blight victim, it can chain on to the melee, causing a wipe.

When the spores come out, a raid leader assesses them and makes any movement call outs. If the spores are 1/2 ranged/melee or 2/1 ranged/melee, people simply collapse. Only 3/0, and 0/3 spore distributions need a call out where either a ranged will run in to the melee group, or a melee will run out to the ranged group. The odds of a 3/0 spore distribution is roughly 1/27. The odds of a 0/3 is roughly 8/27. After the spores pop, anyone who ran from melee to ranged, or ranged to melee returns quickly to their original place.

Because of the massive amounts of damage received when Festergut has inhaled 3 stacks of Inhaled Blight it is required for tanks and others to rotate their cooldowns. The use of such abilities as Shield Wall, Divine Protection, Icebound Fortitude, and Barkskin should be coordinated with other non-tank player abilities such as Pain Suppression, Hand of Sacrifice and Guardian Spirit to maximize the amount of time that one of these abilities is active.

About once every 12 seconds, Festergut casts Gastric Bloat on the tank. This debuff increases the tank's damage, but the 10th stack kills the tank in an explosion for massive AoE damage, which is almost certainly a wipe. Therefore, the second tank must taunt at 9 stacks. This happens for the first time right around when Festergut is about to cast Inhale Blight for the third time, the second time after the 5th inhale. Switching on an Inhale is a very good idea, because while inhaling, Festergut stops DPS for a short moment. Healers need to be aware of the tank switch, particularly at the first time it happens during a high-damage period. The mechanic is quite similar to the Phase Punch of Algalon the Observer.

It's not possible to switch earlier, because the debuff lasts 100 seconds, it has timed out only after the second tank has taken 9 stacks. In 25 player it's possible to use 3 tanks and allow a less tight rotation, but this comes at the price of reduced DPS. Paladins can also clear the debuff with Divine Shield.

After the tank switch, the prior tank does 90% increased damage (= increased threat). Therefore, the "old" tank must be very careful not to pull Festergut off the new tank. They should target themselves before the switch to stop their attack. Hand of Salvation helps. Tanks should switch off aggro generation abilities like Paladins Righteous Fury and switch on DPS enhancing abilities (e.g. Druids Cat Form, Death Knights Unholy Presence). Of course they must not forget to get back in a proper tanking configuration prior to taking over again.

This encounter is very healing intensive, at the same time it's desirable to bring the minimum number of healers (probably 5/2 in 25/10 player). Healers need to maintain the health of the active tank, as well as repair the AoE damage from Gaseous Blight, and heal Vile Gas victims. After each inhale, the raid damage decreases, but the damage to the tank increases more. It's a good idea to predesignate one healer for each inhale who switches from raid healing to tank healing. If possible, healers should stand with the melee group.

The big addition in heroic mode is Malleable Goo. Professor Putricide periodically flings Malleable Goo from his balcony as he watches the fight. Tanks, melee, and ranged are all targets for malleable goo.

If players are in the blast radius they take damage and suffer a 12 seconds 250% attack/casting speed debuff. If DPS are debuffed you will have difficulty beating the enrage timer. If healers are debuffed, the tank will probably die.

If you tank Festergut on the south side of the room you have more time to react to Malleable Goo. The target of the Malleable Goo is indicated by a small green puddle on the floor. It is difficult (but not impossible) to see when the Gaseous Blight is at full strength. It is also obscured by the player's polygons and by festergut's feet. To more easily spot the goo, move your player a little bit and check the floor whenever Malleable Goo is in flight. The blast radius is larger than the puddle.

There will be times when you have to group up for a Gas Spore at the same time there is a Malleable Goo in flight. All players must know how to position themselves to get innoculated while not getting blasted by goo.

The tank is often in danger when a healer has to dodge Malleable Goo and is forced to use instant heals instead of big heals. Quick communication can let the tank know to use his cooldowns and improve his survival chances.

Once players have learned how to dodge goo while fulfilling their roles this hard mode becomes much less intimidating.

Death
Festergut yells: Da ... Ddy...
Professor Putricide yells: Oh, Festergut. You were always my favorite. Next to Rotface. The good news is you left behind so much gas, I can practically taste it! 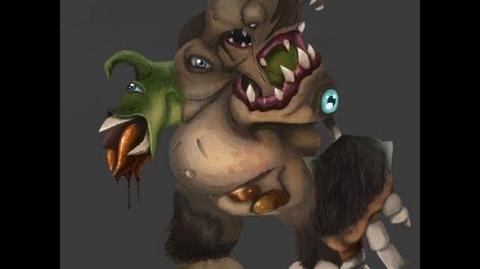 How to Solo Festergut 10 man HC 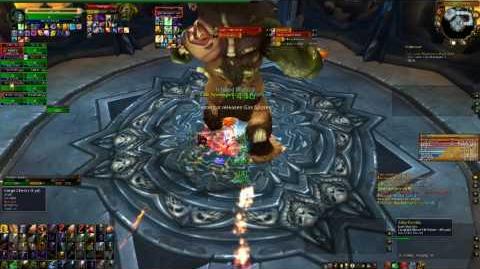 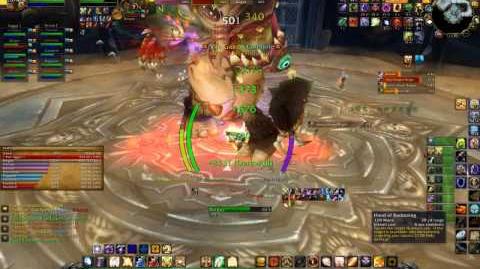 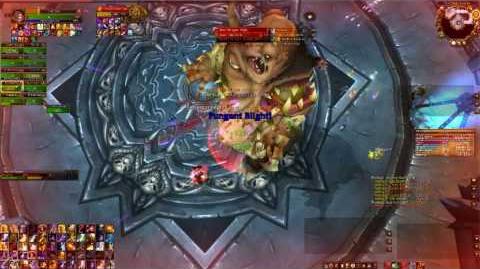 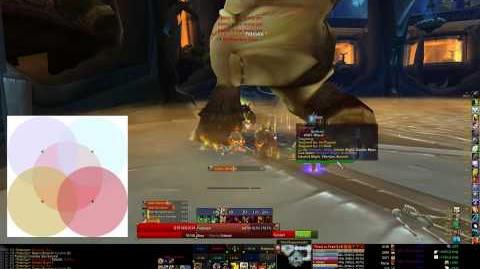 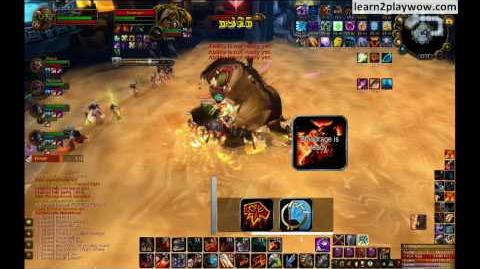 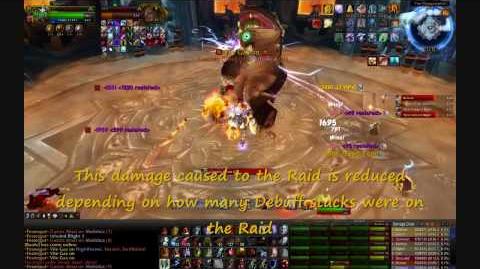 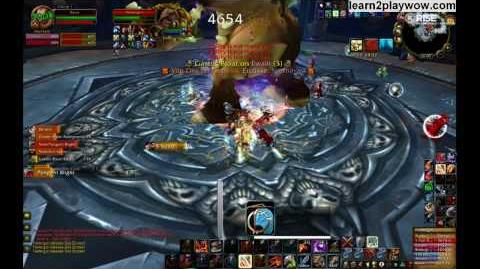 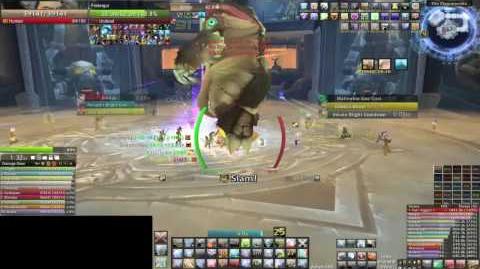 See this subject on the Hearthstone wiki: Festergut