Flight Form (aka the raven or Storm crow) is a druid ability learned at level 58. 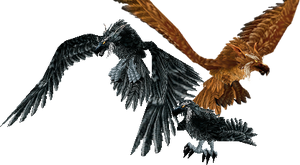