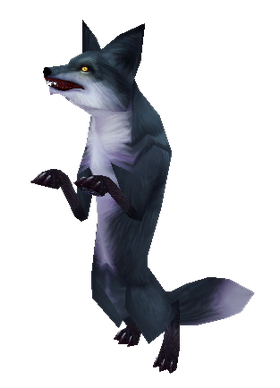 For the fox mob in Gilneas, see Fox (mob).

A fox is a small predator that is native to Azeroth and also lives within the Emerald Dream. They exist in the proper balance.[1] A tiny red fox with a sly — yet gnomish — visage was one of the Ancients, during the War of the Ancients.[2]

Foxes were introduced with World of Warcraft: Cataclysm. They are found all across Azeroth.

Though hunters can respec their pet foxes into Cunning or Tenacity, they are inherently Ferocity. In addition to the abilities that come standard with all pets ([Growl] and [Avoidance]) and those given to their natural or retrained specialization, all foxes are given the following:

Mobs with level numbers are tamable by hunters.

Perhaps the red fox ancient is somehow tied to either foxes or the gnome race based on its description.