Several of the huge Frostmaul Preservers and Frostmaul Giants reside here. They are elite mobs of level 59 and 60, and drop Frostmaul Shards for the quest Luck Be With You, which starts with Witch Doctor Mau'ari in Everlook. The giants also drop Starbreeze Village Relic for the Dungeon Set 2 quest chain.

These Giants also have the greater frost protection potion recipe in their loot table, and therefore can be quite good to farm.

At the top of the Gorge on the Eastern side there is a hidden road leading to an isolated Dwarven spot right at the edge of a cliff. If you've flown into Winterspring from places like Orgrimmar or Azshara, you'll have flown over this spot many times.

Here you'll find an Ironforge flag, some boxes, lots of booze, a mug, and a rifle leaning on a chair overlooking the cliff and the Great Sea far below. There are no items at this location you can interact with but Thorium and Black Lotus are sometimes nearby. Otherwise it's just a nice view.

The bottom of the Gorge has been overrun with Ice Avatars. The Frostmaul Giants still roam the upper rim and have pushed outward to almost Dun Mandarr. Vi'el and Lorax have both been relocated to the bottom. The bridge to Darkwhisper Gorge will be removed, rendering it unreachable by foot.[1] 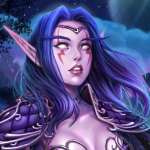