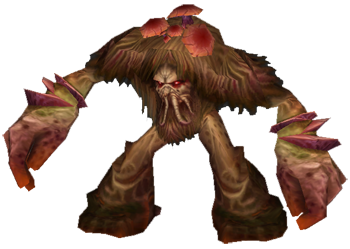 Fungal monsters are fungus-like creatures found on both Azeroth and Outland.

Loatheb is an undead fungal monster. He was the hideous result of fusing the living plague of the Plaguelands with the bog beasts of Azeroth. He can be found at the end of the Plague Quarter in Naxxramas.

The name "fungal monster" is taken from the game files, as no other name is known.

The fungal monster's face, with its red eyes and tentacled mouth, closely resembles that of Marvel Comics' Man-Thing.