Gamon is a level 90 elite named tauren found in Orgrimmar's inn in the Valley of Strength. According to the quest of which he was an objective, Gamon is employed by Tazan the troll, and was generally a drunkard. Gamon can crit a L80 cloth wearer for well into the 100K damage range.

Gamon was always known as "The Boring Killer". In other words people would kill him for fun whenever they wanted to. However, ever since the Cataclysm happened it seems as though Gamon changed with Orgrimmar. And with the Mists of Pandaria release, he is now level 90, unlike his old level 12.

Unlike the other NPC characters in Orgrimmar, Gamon is attackable and many Horde players fall victim to his wrath after accidentally (or ill-advisedly) attacking him. In previous times, Horde players traveling through Orgrimmar or logging in from the inn would hear the sounds of a bar fight followed by a tauren death groan.

Although it was probably an unintentional design quirk on Blizzard's part, the player-driven murders by Gamon contribute to the atmosphere of Orgrimmar as being a rough place. Gamon was a famous mob because his deaths were frequent and public, as players often try to drag him out of the inn to be killed by him in front of the Auction House, where everyone can watch. Observing players frequently respond to Gamon's demise by targeting him and spamming emotes such as /cry, /mourn, /spit, /laugh, and /dance.

Gamon was susceptible to mind control. Priests enjoyed sending him out of the inn to run and jump around Orgrimmar's citizens. Gamon had a unique ability called [Pride Breaker] which could be used on other players and NPCs that did no damage, but would punt them about 5 yards, this would also dismount a mounted player. Since patch 3.1.0, this ability has been removed and since patch 4.0.3a Gamon is immune to all forms of crowd control, uses the abilities Charge and Battle Shout, and wrecks adversaries with his new two-handed axe.

Gamon was treated by Horde players much the same way as Hogger is by Alliance players, if Hogger were a marauding champion of death and destruction. Players have kited Gamon to remote locations such as Thunder Bluff, Onyxia's Lair, and even Silithus. In addition, some level 80 players formed up raids to attack Gamon as if he were a boss. Players also enjoy linking epic/legendary items in chat, jokingly claiming that the items are epic/legendary drops from Gamon. He did, however, drop typical level 12 loot (in the words of one Blizzard poster: "MANY COPPER!")

Gamon's unfortunate fate came from the fact that he was involved in a Horde rogue class questline in which you must pickpocket him to receive a key. Any mob that a player can pickpocket must also be attackable. While this placed Gamon in the difficult situation of being constantly killed, it would also make the quest very difficult to complete since players might not have a good chance of actually finding Gamon alive.

Gamon's re-spawn timer was 5 minutes after he is killed.

[55] Warchief's Blessing — in which he promises to protect the citizens of Orgrimmar from the encroaching death knight. While all other NPCs will appear unfriendly to the death knight, Gamon is actively hostile and will chase after any death knight that comes too close, loudly yelling that he will save Orgrimmar.

In addition, for the quest achievement

Veteran of the Wrathgate, players will be sent back to a different (phased) Orgrimmar under martial law and talk to Thrall. You will find Gamon, among other loyal Horde citizens, gathering in front of the bank. 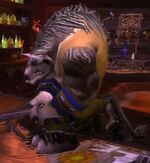 As of the recent updates in Patch 4.0.3, Gamon is given a 2-handed Axe, now has the ability to charge and is immune to all types of crowd control. Blizzard added this to stop players from kiting him around.

[74] The Battle For The Undercity can still be data-mined.

In Patch 5.3, Gamon is under arrest by Kor'kron Guards outside the Inn. He appears to be in a stand off and matched by 5 of the guards.

In Patch 5.4, Gamon was moved into a different area of Orgrimmar. He is kneeling infront of a Kor'kron Overseer with three Kor'kron Grunts with guns pointed at him.

In Siege of Orgrimmar, players fight with Gamon against General Nazgrim and Kor'kron soldiers.

If the player has a tavern of any level built in their Garrison, Gamon may sometimes appear and offer a quest. The first completion of this quest rewards the player with Gamon's Braid, a toy that transforms the player into Gamon for 10 minutes.

Gamon appears as a card in the World of Warcraft Trading Card Game:

During the now obsolete

[74] The Battle For The Undercity