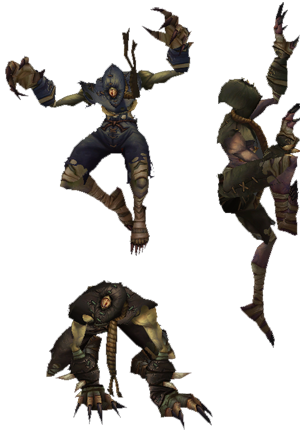 Geists are hideous crawling, gangrel creatures of the Scourge. Agile and quick despite their crawling gait, they are one of the lower-ranking forms of undead. Aside from use in combat, geists see a lot of service as manual labor. Despite their gagged, hooded faces (dominated by only one eye) and muffled, harsh cackling, geists are capable of coherent speech.

Geists have hangman's ropes around their necks[1]. This implies that these are executed criminals (or enemies of the Scarlet Crusade, which to the Scourge amounts to the same thing...) raised into undeath by the Scourge. There is further evidence of this within the quest "High Commander Halford Wyrmbane" where it is stated that the traitors on the list are "hanging by the arches" yet there is no sign of any men hanging, just geists within the town square.