WoWWiki
Register
Don't have an account?
Sign In
Advertisement
in: Lore stubs, Articles with non-standard external links, Warlords of Draenor stubs,
and 3 more 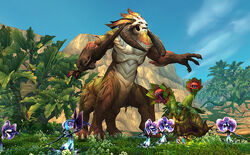 Genesaur are a type of hybrid creatures introduced with Warlords of Draenor. They are on the same scale as the magnataur and described as lumbering beasts. They appear to be a cross between a lion and reptile, having enormous tusks protruding from their lower jaws.

Genesaur are enormous demigods who date back to the age of colossals, when giants shaped the terrain of Draenor amidst constant warfare. The botani have retained the ability to communicate with these bastions of life, and genesaurs are revered as gods in their culture. Draenei have not yet determined if genesaur are immortal or not; genesaur emerging from botani-tended pools often retain the memories and will of their long-dead forebears. Adventurers fortunate enough to catch a glimpse of these rare beings are cautioned to give genesaur a wide berth. They are deceptively quick given their size and destroying them will take a small army of well-equipped heroes.