Ghosts are tortured spirits who writhe in the agony of undeath. Usually unable to realize that they are no longer alive, they roam the trackless wastes between the Twisting Nether and the physical world, seeking release from their eternal suffering. Though they are not necessarily evil, they often hunger for physical contact, often causing great harm to any living beings they touch.[1]

Ghosts are the spectral remnants of intelligent beings who, for one reason or another, cannot rest easily in their graves. A ghost greatly resembles its corporeal form in life, but in some cases the spiritual form is somewhat altered.[2]

Ghosts are the spectral impressions of individuals who died due to the plague or due to some incredibly traumatic incident. Often, those who contract the plague attempt to end their own lives rather than join Ner'zhul's armies; this attempt is not always successful and often results in the creation of a spirit which is independent of Ner'zhul's influence, but not completely dead.

Ghosts are often angry spirits, robbed of their lives through circumstance or will. They resemble their corporeal shape, but are completely intangible. These creatures haunt the site of their death or some other location integral to their past and are often violent and dangerous. They hate life, and the feeling of having warmth and hope near them is enough to drive ghost into a murderous frenzy. Because most ghosts are completely insane, it has not proven worth Ner'zhul's time to capture and enslave them for his own uses.

Ner'zhul no doubt has some ghosts in his employ — singular creatures that are powerful enough to be useful but not powerful enough to cause Ner'zhul followers any trouble keeping them dominated. These creatures are extremely vengeful, expending their rage upon any opponent they can find and using their ghostly powers to shred any opposition and break any unfortunate soul that crosses their path.[3]

Sometimes it is easily possible to see which race a ghost belonged to while it was living because it appears as a see-through, often bluish, but clearly identifiable example of its race, but this is not always the case. The ghost of a fellow party member can be seen if the player is in a party.

In the Warcraft universe, the term "ghost" is sometimes applied to any undead incorporeal being, whether it is a banshee, spirit, wisp, or wraith. 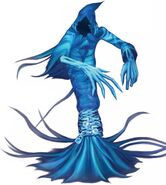 A ghost from Monster Guide.

The ghost of a human paladin.

After death in World of Warcraft

This is also the name of the form you turn into after death in-game. Night elves turn into wisps.