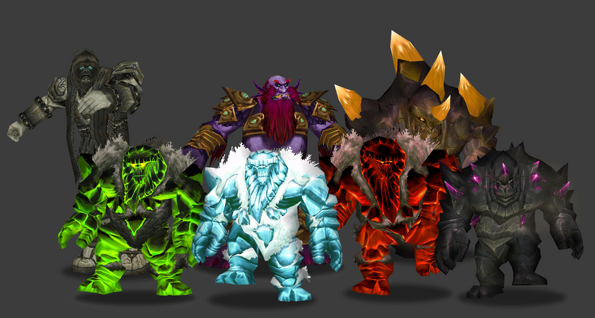 Giants are a type of creature or mob in the game similar to humanoids, but of the very large sort (above 3 meters or so), and larger than most ogres. This term includes most semi-intelligent and some intelligent large humanoids. Most giants are elite.

Many of the giants on Azeroth were created by the Titans as part of their ordering of Azeroth, meant to protect and oversee the land and ocean. During the Burning Legion's first invasion, nearly all of the giants were destroyed, and now only a handful remain in the most untouched areas of Azeroth; where they are still fulfilling their ancient duties, however some (molten giants and Baron Kazum for example) of them seem to serve the Old Gods against their will. Mountain Giants can not reproduce, but it is unknown if all giants share this trait. It is unlikely due to the evidence that Colossuses and Sea Giants can. When Illidan threatened the security of the world, Arch Druid Malfurion Stormrage used his vast powers to call upon the aid of the Mountain Giants. Kael'thas ordered the dropping of huge crystals onto Outland, which summoned giants and corrupted them. This explains why Draenor's giants seek to harm the lands instead of protecting it.

Other creatures called giants in Warcraft include: