Gwennyth Bly'Leggonde states that the naga use them as transportation as well if a Beached Sea Turtle is found with a carriage on its back. The naga carriages are used both in battle and in transportation of their supplies on to land. The naga do not treat their mounts well, and often let them get killed.

Amongst the many fairly large and often dead turtles that litter the many shorelines of Azeroth, it has also been stated by J. Allen Brack that a giant turtle will be used as a transportation system among zones in Northrend as turtle boats.

In Warcraft II, Giant Turtle was the name of the submersible unit used by the Horde. Later sources call this the giant turtle battle sub.

These giant turtles are native to the southern seas and were captured by the Stormreaver Clan. Pacified by potent spells of control, these lumbering monstrosities are fitted with watertight canopies strapped onto the backs of their shells and are used as submersible Orcish craft. By submerging under the waves, the Giant Turtles can steal upon unsuspecting enemy craft and report their position to the Horde fleet as they are visible solely to Towers, creatures of the air, and other submersible vessels. The daring Goblins who control them are dedicated to destroying enemy ships by launching hazardous, steam-driven canisters containing highly volatile liquids that can shred even the strongest of armor.[1] (W2Man 77) 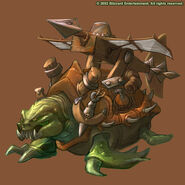 "War Turtle"[1] by Thammer, with some sort of goblin carriage on its back. 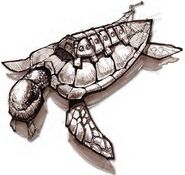 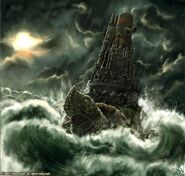 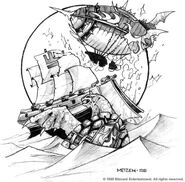