For the faction reward augment items of previously the same name, see Arcanum.

Glyphs are spell and ability cosmetic enhancements created by scribes. Until used, they are not soulbound and can be traded or sold. The colors used in glyphs are colors of the class for which they are meant. Glyphs are optional and not vital to game completion, although they may provide an edge.

Once learned, glyphs are permanent and may be switched out at any time outside of combat. Changing a glyph requires a [Vanishing Powder] for characters level 25-120, and a [Dust of Disappearance] for characters over level 80. 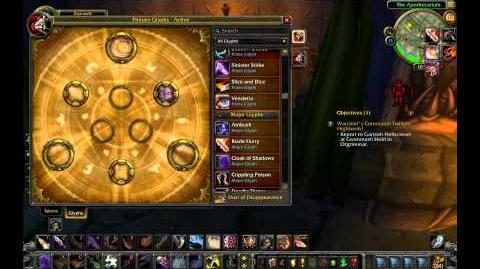 FranksPlace.org World of Warcraft Mists of Pandaria v5.0.4 Specializations Talents and Glyphs. by Frank on Sep.12, 2012