This article is about the playable gnomes and the Gnomeregan Exiles faction. For general history of the race, see gnome.

A race of diminutive beings, gnomes have made their mark on Azeroth through the application of a collective intelligence and ambition overshadowing that of their larger peers. Gnomes are renowned mechanics, engineers, and technicians, widely respected for their knowledge of the scientific facets of the world and their ability to transform said knowledge into surprising tools, vehicles, armor, and weapons.

The eccentric, often brilliant gnomes are held as one of the most peculiar races of the world. With their obsession for developing radical new technologies and constructing marvels of mind-bending engineering, it’s a wonder that any gnomes have survived to proliferate. Over the years, the gnomes have contributed ingenious weapons to aid the Grand Alliance in its fierce battles against the Horde.

Little is known concerning gnomish history previous to the Second War, even among the gnomes. Much of gnomish philosophy is focused on forward-thinking, inventive concepts; little thought has ever been given to history or non-scientific records. However, recent developments have uncovered evidence of prehistoric mechagnomes created by the titans to help shape the lands of Azeroth. Like many of the titans’ creations, these helpers were afflicted with the Curse of Flesh, and they became what is known today as the gnome race.

It wasn’t until their discovery by the dwarves centuries later that gnomes were recognized as a viable and important race. The dwarves were impressed with the ingenuity and quickness of their smaller “kin” (for they had also been titan-forged and similarly cursed), and they assisted the gnomes in constructing a capital city, Gnomeregan, in the foothills of Dun Morogh near the dwarves’ own capital of Ironforge. From their wondrous techno-city, gnomes provided invaluable support in weaponry, vehicles, and energetic troops to the Alliance of dwarves, humans, and high elves.

Thriving in the wondrous techno-city of Gnomeregan, gnomes shared resources of the forested peaks of Dun Morogh with their dwarven cousins for generations. When the Burning Legion invaded, the gnomes strangely refused to send aid to their allies. It wasn’t until the war had ended that the Alliance learned the reason for the gnomes’ withdrawal: around the time of the Third War, an ancient menace had risen from the bowels of Azeroth to strike at Gnomeregan. The troggs — believed to have been unearthed from the Uldaman excavation – erupted beneath Gnomeregan and began to slaughter every gnome within the city. Knowing that their allies’ priority was defeating the Burning Legion, the gnomes decided to make their stand alone. Though they fought valiantly to save their beloved city, Gnomeregan was lost.

At the command of the High Tinker Mekkatorque, the gnomes opened the pressure valves of their giant, grinding machines and released toxic radiation throughout the city. Though the radiation killed the troggs, the gnomes soon discovered that it killed their own people just as quickly. Most of the gnome race was wiped out during the fall of Gnomeregan; some say that as much as 80 percent of the gnomes died during those horrible days. The few survivors fled to the safety of nearby Ironforge. There they quietly went about rebuilding their forces, healing their wounds, and preparing to retake their ravaged city.[3] (WoWMan 174)[4]

Just prior to the Cataclysm, the gnomes’ leader, High Tinker Gelbin Mekkatorque, led an attack on Gnomeregan’s invaders. It was a successful first maneuver, but there will be much more bloodshed before the entirety of the gnomeland is liberated.

In World of Warcraft: Cataclysm, Gnomeregan Exiles were given their own unique starting area near Gnomeregan, rather than sharing Anvilmar with the dwarves. Players worked to defeat Sicco Thermaplugg after their first attempt to retake the city: Operation: Gnomeregan.

With the success of Operation:Gnomeregan, gnomes begin their journey within the upper reaches of Gnomeregan as one of the survivors of the radiation poisoning. Making their way to the surface, they continue their adventures at New Tinkertown,

working to clear away the surface of enemies before heading out to Ironforge.

Despite their short limbs and large heads, gnomes are remarkably nimble. They can keep pace with taller races, jump twice their height, and can make quite the Escape Artist by slipping out of both conventional and magical traps.

The Expansive Mind of the gnome race is readily apparent to the casual observer. Many of the Alliance's best arcanists, scientists, and tinkers have been gnomes.

Engineering Specialization is a defining characteristic of gnome culture, and gnome creations such as the Deeprun Tram regularly make life easier and (more or less) safer for the Alliance's citizens.

Gnomes take the same approach to the arcane sciences as they do to other technologies. Their carefulness and precision with magic has given them a slight Arcane Resistance.

Gnomes have fair starting stats for the rogue class. This is because high agility benefits rogue's critical hit chance and dodge chance. The melee damage of rogues (and hunters) is based on agility as well as strength. A notable feature that sometimes may give a gnome rogue advantage is their very short height. An unprepared and less alert enemy player might not notice the dangerous gnome rogue creeping near him, especially if his camera is pointed upward or he is distracted. Of course this advantage rarely appears and an experienced player knows to be alert.

For mage and warlock classes, gnomes have an advantage (at low levels) because their high initial intellect means they have a larger mana pool (can cast more spells before running out of mana). The 5% intellect bonus given by the Expansive Mind trait is calculated after adding bonuses from gear, so it continues to offer an advantage even at high levels.

Why gnomes in the World of Warcraft?

From Insider Interview — with Chris Metzen: Gnomes and Trolls as Playable Races from the Blizzard Insider:

I think we deal with it a little bit in upcoming D&D supplements. During Warcraft II, the gnomes were, in effect, building weapons and lending designs to the Alliance — but they were staying out of any direct fighting. In Warcraft III and Frozen Throne, and even in World of Warcraft, it becomes clear that the gnomes have had internal problems of their own for several years. As of World of Warcraft, they still offer support to the Alliance in terms of building tanks, designing weapons, sending flying machines, and so on. But they had a problem at home that has recently been discovered — an ancient menace from the depths of the underground, called Troggs. The Troggs invaded the gnomes' city of Gnomeregan and wiped it out. The gnomes decided not to let the rest of the Alliance know about this because they figured that they could deal with it on their own. But Gnomeregan fell, probably thanks as much to the gnomes' own actions as to those of their enemies — they likely blew themselves up with whatever failsafe devices they used to defeat the threat. After the destruction of their homeland, the gnomes fled to the safety offered by their nearby allies the dwarves. 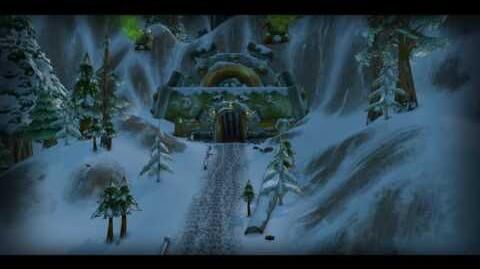 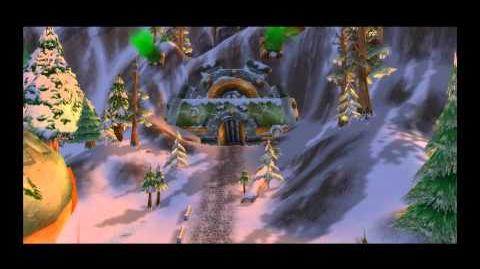 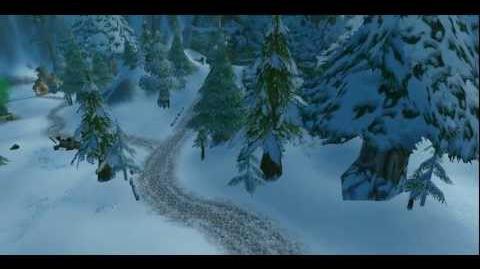