The industrial development of the Blackrock clan has left the once-glistening oasis of Gorgrond a desolate, rocky badland, its only remaining natural produce the steam that boils up from massive vents beneath the earth. Gorgrond has become the source of the Iron Horde’s arsenal—its foundries churn out weapons, armor, and torrents of smoke great enough to be seen from neighboring lands.

Gorgrond is a zone introduced with

Warlords of Draenor located in north central Draenor. It is the home zone of Blackhand and his Blackrock clan of orcs who serve as the smiths of the Iron Horde. Giant steam vents dot the landscape, and the Blackrock cap these to use for the Iron Horde. The Blackrock Foundry raid will be located here.

Opposing primeval forces are locked in an eternal battle in the treacherous jungles and unforgiving canyons of Gorgrond.

Located in northern Draenor, Gorgrond is where heroes either rise up and persevere or fall and become carrion for rylaks. After their initial confrontation with the Iron Horde (in Shadowmoon Valley for the Alliance or Frostfire Ridge for the Horde), this brutal, beautiful land divided by ancient hostilities is the factions' next destination.

After withstanding the Iron Horde’s initial assault, they make their way into Gorgrond with a handful of allies to try to discover the Blackrock orcs’ intentions and find a way to thwart any plans the Iron Horde may have. It’s a perilous recon mission. Gorgrond is a land of giants embroiled in an epic struggle between creation and destruction.

The Alliance enters from the eastern coast, where they’ll get their first taste of things to come. They’ll immediately encounter an elite group of draenei known as the Rangari holed up in a hidden encampment, fighting for their lives against vicious plant-like creatures. When the dust settles, they join the Rangari survivors and make a retreat to a clearing deeper in the zone.

The Horde enters from the west, where they’ll encounter the Laughing Skull clan. These maniacal orcs are volatile and bloodthirsty, capable of extreme brutality — and as the Horde experience Gorgrond, they’ll begin to understand why. The Laughing Skull orcs are struggling to maintain their ancestral territory, but the brutality of being constantly assaulted by the warring factions of the zone has forged them into bloodthirsty savages.

Gorgrond consists of two distinct regions, each reflecting the nature of its inhabitants. The eastern portion of the zone is filled with lush plant life and shimmering pools. It seems idyllic. The northwest region couldn’t be more different. It’s a dry, barren wasteland, but with a beauty of its own. Fantastic rock formations mixed with geysers and sulfur pools create an unconventionally vibrant environment.

The forested region definitely isn’t what it seems. The creatures here are merciless in seeking out anyone who enters their territory. They will capture them, kill them, and then infest their corpses with plant life or mulch them into fertilizer. 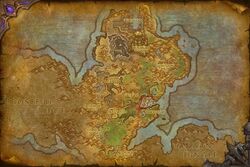 The rainbow, the pristine lake, and the botani homes are a beautiful contrast to the decaying bones and corpses the grove rests upon. The majestic botani move here and there tending to the grove while their infested denizens patrol like mindless guards ready to attack anyone who would threaten the bloom.

The canyon is filled with dangerous monsters and is a barren wasteland, but it’s also somehow incredibly beautiful.

Tangleheart is a lush jungle where botani are working to raise new ancients for their armies. The ancients here have fiercely embraced their susceptibility to fire.