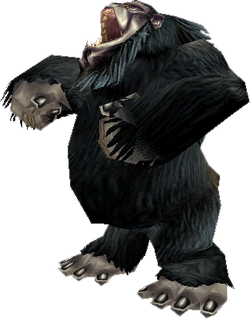 Gorillas are a species of ape found in Stranglethorn Vale, Feralas, Un'Goro Crater, and Sholazar Basin. Gorillas move around by knuckle-walking, although they sometimes walk bipedally for short distances while carrying food or in defensive situations. Adult male gorillas are known as silverbacks due to the characteristic silver hair on their backs. They are typically hostile to any travelers that come across them despite the fact that they are herbivores. An enormous gorilla named King Mukla dwells on Jaguero Island in southeast Stranglethorn Vale, holding a tauren named Princess Poobah captive.

Though hunters can respec their pet gorillas into Cunning or Ferocity, they are inherently Tenacity. In addition to the abilities that come standard with all pets ([Growl] and [Avoidance]) and those given to their natural or retrained specialization, all gorillas are given the following: